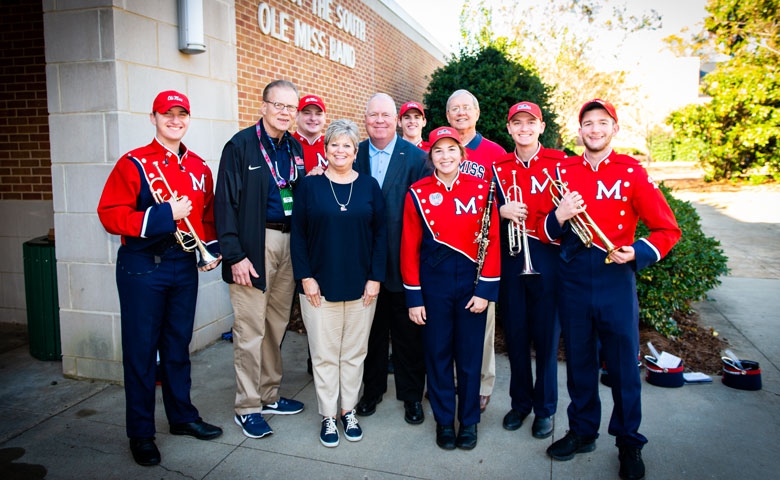 A gift to the University of Mississippi is expected to help take the Ole Miss band program to a new level — literally.

Sumner Spradling of Greensboro, North Carolina, recently gave the university $100,000 to establish the Band Director’s Tower Fund, an account designed to support the construction of a new director’s stand overlooking the practice field of the “Pride of the South,” UM’s acclaimed marching band.

“I hope the tower will enable the band director and staff to observe the marching band in a safe environment while also helping to move Ole Miss practice facilities into a competitive position,” said Spradling, a Clarksdale, Mississippi, native who graduated from Ole Miss in 1975 with a bachelor’s degree in music education; he later earned a master’s degree in music education from the University of South Carolina.

Because of his lead gift, the tower will bear Spradling’s name.

“Sumner stood beside me in Jazz band decades ago and is a great musician, composer and better person,” said Ole Miss band director David Willson. “He contacted me and asked what he could do to help the band. He offered to sponsor it and do more, wanting nothing in return but the good feeling it gave him to serve the institutional band that served him. Now he is the leader in kicking off our field renovations and we are very thankful for his generosity and leadership in this important campaign.”

“I loved the idea of becoming an Ole Miss Rebel and when I visited the campus, Dr. Snavely welcomed me and offered an attractive scholarship,” said Spradling, who played trumpet for the band. “Plus, Ole Miss had — and still has — a reputation for academic excellence and therefore was the best option among the in-state schools.”

During his time at Ole Miss, Spradling focused on earning top grades, often taking in excess of 20 hours a semester while also managing to practice, attend rehearsal, work part time in the music library and become active with a number of campus and honorary organizations, including Phi Mu Alpha, Kappa Kappa Psi and Phi Kappa Phi.

“The memories that stand out from my time at Ole Miss are not necessarily extraordinary; they are instead mostly of the simple pleasures,” said Spradling, elaborating, “… enjoying the beauty of the campus while walking to class, the activity and excitement of home games, making lifelong friends, eating pizza at Pasquale’s on the Oxford Square, and, believe it or not, classes. I loved them!”

After graduating from Ole Miss and spending six years as a band director in Sumter, South Carolina, and at Southwest Baptist University in Bolivar, Missouri, Spradling returned to Mississippi to help with the family business. His father founded Infolab, Inc. in Coahoma County, Mississippi, which became one of the nation’s largest regional medical-supply distribution centers, covering 22 states. Upon his father’s death, Spradling became president, managing the company for three years until 2012, when Infolab merged with a larger company.

He has always kept his interest in playing music.

“Through the years, I have continued to actively pursue opportunities in music, serving as interim minister of music in numerous churches and playing in various professional and community ensembles.”

Spradling and his wife Risa have two adult sons, Jason and Carter, who live nearby with their families. He enjoys spending time with his grandchildren as well as farming, hunting, golfing and time at the beach. He remains active in his church and serves as principle trumpet in one of the local symphonies. He also plays in a swing band in Danville, Virginia.

Ron Wilson, the band’s development officer, said that up to $100,000 more is needed to fully cover the tower’s construction costs.

The Sumner Spradling Band Director’s Tower Fund is open to gifts from individuals and organizations. To contribute, send checks with the endowment name noted in the memo line to the University of Mississippi Foundation, 406 University Ave., Oxford, MS 38655; or visit www.umfoundation.com/makeagift.

For information on supporting the Pride of the South, contact Ron Wilson, development officer for the College of Liberal Arts, at 662-915-1755 or jrwilso3@olemiss.edu.