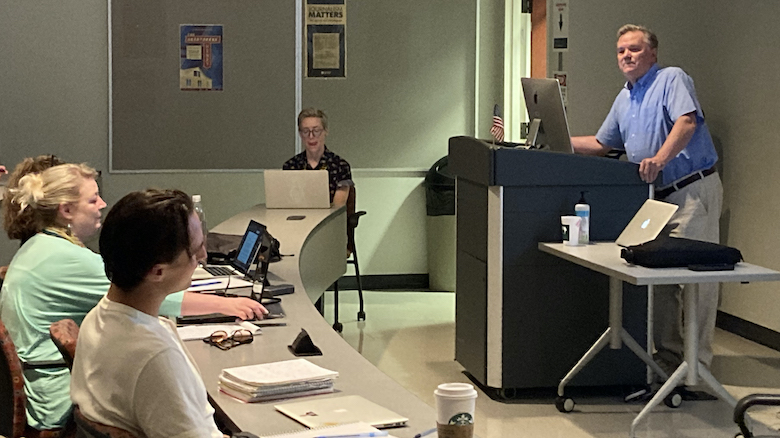 David Sheffield (right), former head comedy writer for ‘Saturday Night Live,’ leads a comedy workshop at the University of Mississippi School of Journalism and New Media. Sheffield is in Oxford directing his play ‘The Heartbreak Henry,’ which he based on his experiences managing the Oxford hotel as a 19-year-old Ole Miss freshman in 1967. The play runs Aug. 11-15 at the Gertrude C. Ford Center for the Performing Arts. Submitted photo

David Sheffield, a University of Mississippi alumnus who went on to write for “Saturday Night Live” and several Eddie Murphy movies, has taken to the stage with “The Heartbreak Henry,” a comedy based on his experiences as manager of an Oxford flophouse hotel in 1967.

The Theatre Oxford production runs Aug. 12-15, with a preview Aug. 11 in the Mary Ann Mobley/Gary E. Collins Studio Theatre at the Gertrude C. Ford Center for the Performing Arts. Tickets can be purchased through the Ford Center Box Office at 662-915-7411.

The production is co-sponsored by the UM School of Journalism and New Media.

Wickham said she was drawn to “The Heartbreak Henry” after seeing it in Biloxi in 2018 at the Center Theatre because of its treatment of the people who resided in the hotel in all their quirky, contentious and confused character.

“David Sheffield was an innocent freshman, just 19 years old, who was so cash-strapped he hitchhiked to campus from southern Mississippi,” she said. “He landed a job at the Henry Hotel as a theater major and had compassion for his tenants.

“It was that humanity that attracted me to this project and why I worked to bring it to Oxford.”

The Henry became a residential hotel in the 1970s, with rooms renting for $45 a month. Later, the building was turned into the Abbey Apartments. Since 2015, the concrete building, with its gable-and-hip roof, box cornice, molded frieze and closed gable ends, has been home to Rafter’s bar.

The play features some of the cranky characters who frequented the run-down hotel during Sheffield’s tenure as manager. To Sheffield’s horror, he had to evict two waitresses with illegal social side gigs on a snowy Christmas Eve.

“This story happened about 50 years ago,” said Sheffield, who lives near Laurel. “I met a bunch of characters I couldn’t get out of my mind. At the Henry, the unexpected was the norm.”

The show is also supported through grants from the Mississippi Arts Commission, the Ford Center and the Clancy Collins fund, as well as community donors.

“I went to Ole Miss for an education, but the real education took place at the Henry Hotel,” Sheffield said. “I saw things at the Henry I never saw at home.”

Sheffield was co-screenwriter of the “Coming To/2 America” movies, “The Nutty Professor,” “Boomerang” and other Eddie Murphy movies, but he never forgot his stint at the Henry Hotel. With “The Heartbreak Henry,” Sheffield is returning full circle to Oxford, where his career as a comedy writer began.