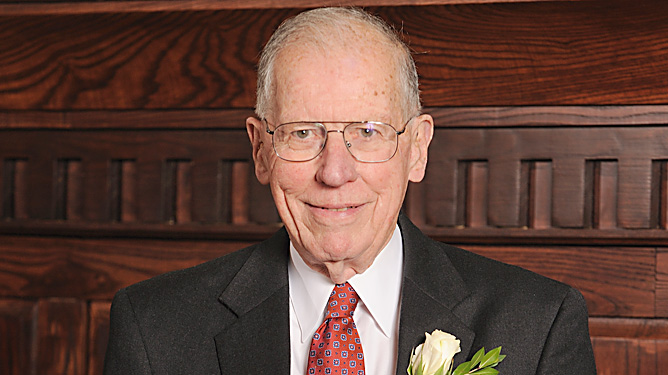 Former Gov. William Winter is the speaker for commencement ceremonies at the University of Mississippi School of Law, set for 11 a.m. May 12 in the Grove.

Winter, the state’s 58th governor, will address 175 law graduates.”If you have ever heard him speak, you’ll know why he was chosen as governor,” said Macey Edmonson, acting dean of student affairs at the law school. “He has been a leader in racial reconciliation and education in the state, and we know he’ll have profound words of encouragement and advice for our graduates.”

The ceremony follows the university’s main commencement, at 9 a.m. in the Grove with guest speaker U.S. Sen. Roger Wicker. In the event of inclement weather, the law school graduation will be moved to 5 p.m. in the Indoor Practice Facility. A map of available commencement parking locations is available at http://law.olemiss.edu/img/pdfs/2012-commencement-map.pdf.

A Grenada native, Winter is responsible for the passage of the Mississippi Education Reform Act, which helped pave the way for publicly funded primary education in Mississippi. He served in the Korean War and World War II, and he received a B.A. degree in 1943 and a LL.B. degree in 1949 from Ole Miss.

He has been a Jamie Whitten Professor of Law and Government at the law school, and he was editor of the Mississippi Law Journal.

The university’s William Winter Institute for Racial Reconciliation, named in his honor, works to promote diversity and inclusiveness in communities.