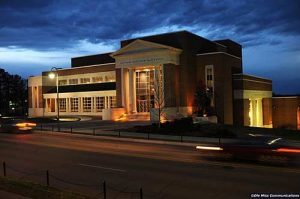 The event is free and open to the public, and a reception will follow.

Those wishing to take part, but unable to make it to the Ford Center, can join in at http://olemiss.adobeconnect. com/livingmusicresource.

Named 2007 Composer of the Year by Musical America and honored with multiple Grammy Awards for his groundbreaking setting of William Blake’s “Songs of Innocence and of Experience,” Bolcom is a composer of cabaret songs, concertos, sonatas, operas, symphonies and much more. He was awarded the 1988 Pulitzer Prize in Music for his “12 New Etudes” for piano.

With Morris, his wife mezzosoprano, he has performed in concert for 40 years throughout the United States, Canada and abroad. In addition to their live performances, Bolcom and Morris have recorded two dozen albums. Their first one, “After the Ball,” garnered a Grammy nomination for Morris. Their most recent recordings are two albums of songs by lyricist E.Y. “Yip” Harburg and Gus Kahn on Original Cast Records: Bolcom’s complete “Cabaret Songs,” written with lyricist Arnold Weinstein, on Centaur, and “Someone Talked: Memories of World War II” with tenor Robert White and narrator Hazen Schumacher, available on Equilibrium.

He has recorded for Advance, Jazzology, Musical Heritage, Nonesuch, Vox and Omega, among many others.

Morris was born in Portland, Ore., and in the words of the Chicago Tribune, “Her voice is notable for ease, flexibility, expressiveness; you understand every word she sings, and in these songs the words deserve to be heard. She projects not just a song, but the character singing it, and gives that character her own irresistibly funny and winning personality.”

In April 2004 Joan was a soloist in the performance of Bolcom’s “Songs of Innocence and of Experience,” which was conducted by Leonard Slatkin and took place almost 20 years to the day after its 1984 U.S. premiere. The Naxos recording of this event went on to win four Grammy Awards, garnering recognition for her as soloist on the album.

The BEAT is part of the established Living Music Resource (www.livingmusicresource. com), an innovative and interactive online video library on vocal music subjects created by UM music professor Nancy Maria Balach and housed at the University of Mississippi.

Its mission is to uphold the customs and standards of the past, while incorporating the contemporary ideas of today’s artists, audiences, students and resources of the 21st century.

Prior to each BEAT interview, website users are encouraged to post questions they want asked of the featured musicians during the live streamed interview. Balach structures the format of the interview with these questions in mind.

The interactive interviews are held in front of a small studio audience, offering these individuals the opportunity to pose questions with the artists. During the actual live stream, questions are welcomed via Twitter, email or by using the live stream chat feature from anywhere in the world.

For more information on Bolcom and Morris, visit www.bolcomandmorris.com.