For Some in Regalia, This Isn’t Just Another Commencement

Several administrators and professors have children graduating from UM this year

David Rock, dean of the School of Education, will hand his daughter, Carly Rock, a bachelor’s degree in secondary chemistry education at graduation, and she’ll get another one in chemistry. A few days ahead of the event, he hadn’t yet come to terms with the idea.

He knew from a young age that his daughter had what it takes to be a teacher, even if that wasn’t in her original plan.

“When she was in middle school, her mother and I saw that she had everything to become a teacher,” Rock said. “She is caring. She is nurturing. She goes above and beyond. She cares about kids. She has always wanted to watch children, and play with children and be a nanny.”

Though she is earning her bachelor’s degree, Carly Rock will enter a chemistry doctoral program, and also work on a master’s degree in science education. She is an aspiring chemistry teacher, which leaves her father astounded.

“For my daughter to be a future chemistry teacher, I can’t even imagine,” he said with a grin. “I have no idea what she is talking about half of the time anyway. She laughs at me as a math person. I am just absolutely in awe.”

Carly Rock said her mom and dad have always been supportive, but she has always been motivated. She didn’t plan to follow her parents’ footsteps into teaching.

“I didn’t want to be a teacher when I was growing up,” Carly Rock said. “All through high school, I was convinced I was going to be a doctor, and everybody always told me I was going to follow in my dad’s footsteps and my mom’s footsteps, but swore it was not going to happen.”

Once she got to college, she decided the classes she needed to be a doctor weren’t her passion. After taking Christmas break to mull it over, she opted to work toward a degree in education, which pleased her dad.

“He never pushed me to do it, which I appreciated; he let me come to that decision on my own,” Carly Rock said. “He suggested I take a special education class. I fell in love. The very first class I took, there was that atmosphere and a professor who truly wanted you to succeed.

“I realized how much I cared about education in general and how much I wanted to show other students that everybody can reach their highest potential if you have somebody who can help you.” 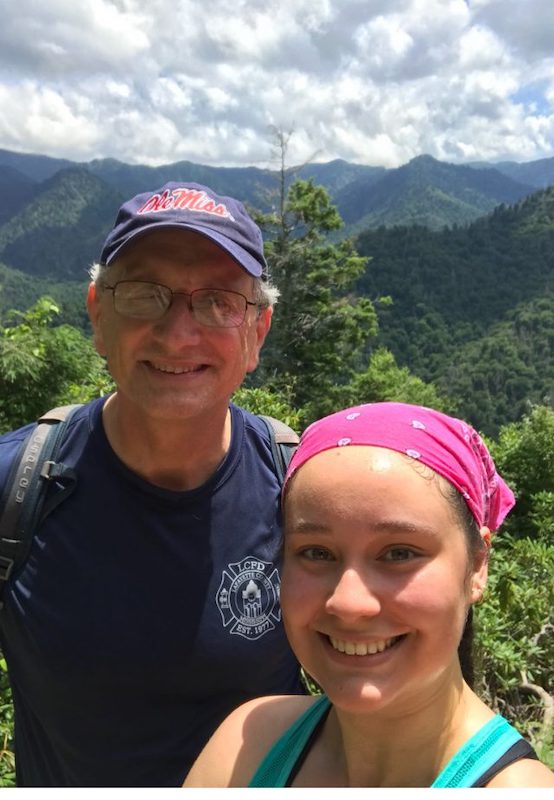 They’ll put on their regalia and head out like they do each Commencement, but for several University of Mississippi deans and faculty members, it won’t be just another graduation ceremony.

Their children will be among those 5,500 prospective graduates at the university’s 166th Commencement. Later in the day, some will actually read their child’s name over the public address system, or hand them their diploma.

“We gave Renée lots of latitude to pursue her own interests,” Douglass Sullivan González said. “I always thought she would venture toward English, given her love of writing and reading, but she pursued her love of the big questions in physics. To see her succeed has made us very proud.”

He said his daughter’s success has been rewarding to the family.

“She joined the world of physics and succeeded,” he said. “She even taught a lab for the Department of Physics, and we beamed with pride, given that great success.”

Renée Sullivan González is working for Hyperion Technologies and living in Tupelo, getting the swing of things as a “real adult.” She’s seen the presence of both her parents on campus as a safety net. She graduated in December and plans to return for Commencement.

“If I had a problem, I could ask my dad for advice on the best person to talk to or the best process to navigate a situation,” Renée said. “I still had to do all the work myself and come up with a solution and if it didn’t work out, I learned from my own failures.

“My parents were close by if something bad happened, and their offices were often a hideaway and quiet study space.”

It could also be a trap sometimes, she said.

“The proximity meant that when I messed up, either academically or in my personal life, there was always the chance that my parents would find out from a third party or that my actions would reflect poorly on them,” she said. “I guess in a way that did help me as well. It made me be more responsible and it was rather good motivation to study.”

Douglass Sullivan González said he’s learned lessons in the classroom and in parenthood that work in both arenas.

“I have learned to trust our students’ decisions and not ‘second guess’ the risks they take,” he said. “To step back and not ‘micromanage’ your daughter’s career takes courage and will power, but it is essential.

“We parents should learn to live out of grace, given our own missteps as young adults.” 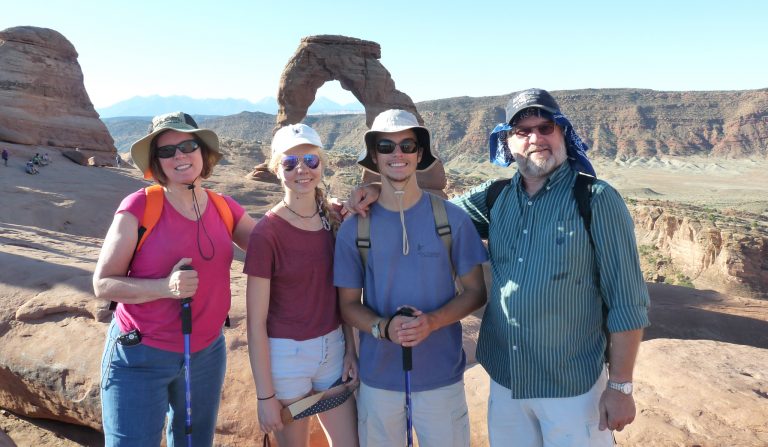 The Eassons – (from left) Darlene, Carina, Lee and Greg – take in the sights on a trip through the American West. Submitted photo

Greg Easson, associate dean for research and graduate programs for the School of Engineering and director of the Mississippi Mineral Resources Institute, was initially worried his son, Lee Easson, wouldn’t get the full experience of going off to college when he enrolled at Ole Miss.

“One of the things I always worried about is going off to college and experiencing college,” Greg Easson said. “He did that. I don’t see him. I’ll ask him, ‘Can you come home for your mother’s birthday?’ He’ll say, ‘I am kind of busy. ‘”

Greg Easson, and wife Darlene, have a daughter, Carina Easson, who is rising junior psychology major at Ole Miss, and a son Cole Easson, who graduated from UM with a bachelor’s degree in biology and a pharmacy Ph.D.

Come graduation day, Greg Easson will read Lee’s name when he is called to the podium to get his diploma. Greg was usually the back-up voice of graduation for Ryan Upshaw, another member of the engineering administration who will be graduating that day, and can’t read the names. It’s kismet that it worked out that way.

Lee hopes to break into video games after graduating. He believes a career in software developing can get him there.

He took a programming class in fifth grade, which was held on campus, and discovered that he loved programming. He begin to teach himself how to do it and ended up at Ole Miss, where he said he had a good experience and will always cherish memories of the time he spent here.

“I’ll remember all of the people I have met, and all of the collective experiences I have had with them,” Lee Easson said. “All of that put together in aggregate was the best part of being here – making friends that I know I will still be friends with after graduation.” 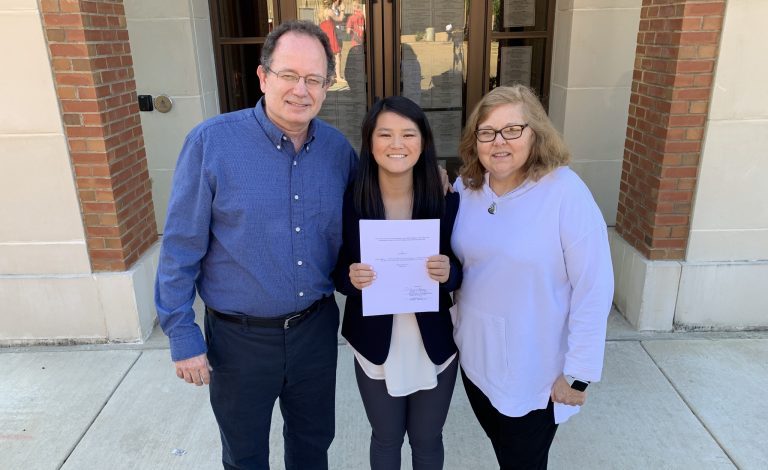 James Reid, chair of the Department of Mathematics, is looking forward to the graduation of his eldest child, Dottie Reid, who is earning a math degree and plans to become a teacher. Reid and his wife, Bonnie, adopted Dottie when she was only 11 months old. Time flies, he said.

“I am very proud,” James Reid said. “It just seems like yesterday we were in church and she was sleeping on my chest during the services. I just can’t believe it. She is my oldest.

“It is special to my wife and I because we haven’t been through this before.”

From an early age, it was apparent that Dottie would make a good teacher, her father said. She has had a strong intellectual curiosity and a natural ability to relate to people since she was young.

She also has grown spiritually at the university, he said. She deeply cares about those around her and tries to help them as much as she can. These are good traits to take the classroom.

“She has a real desire to serve people and also a real ‘save the world mentality,” James Reid said.

Dottie Reid, who will become a junior high teacher at North Panola this fall, also has been admitted to the Mississippi Teacher Corps and will work on her master’s degree at the UM School of Education. Math has always been a passion of hers.

“It is interesting having a math professor as a dad growing up,” Dottie Reid said. “I have always liked math, and having parents as educators is a big part of my life. I know that I am incredibly privileged to have these people as parents.”