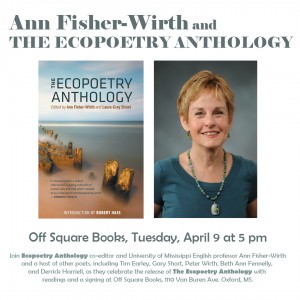 University of Mississippi English professor and poet Ann Fisher-Wirth will sign her latest work, “The Ecopoetry Anthology,” at Square Books in Oxford on April 9.

Fisher-Wirth and Laura-Gray Street, assistant professor of English at Randolph College in Lynchburg, Va., co-edited the critically acclaimed anthology, which was released in February and is considered the most extensive compilation of ecopoetry produced by America’s poets.

“Ecopoetry is poetry that responds to the environmental crisis in one way or another,” said Fisher-Wirth, who directs the university’s minor in environmental studies. “Poetry has the power to open people’s minds and hearts. We cherish what we care about.”

Fisher-Wirth said the idea for the collection grew from her work with the Association for the Study of Literature and Environment, an organization with more than 1,000 members in the United States, and nine international affiliated organizations.

“I became aware that there are a lot of poets who are writing about human interrelations with the other-than-human world and addressing the environmental crisis,” Fisher-Wirth said. “Many people don’t realize how much the environment’s health correlates with our own well-being, but we are ecosystems. We are always in ecosystems.”

The book contains an introduction from Pulitzer Prize-winning poet Robert Hass, who served as U.S. Poet Laureate from 1995 to 1997.

It will be taught in UM courses including English 362: American Environmental Literature 1850-Present and in other poetry and/or environmental studies courses.