Filmmakers Use ‘Visual Oral Histories’ to Tell the Stories of Mississippians 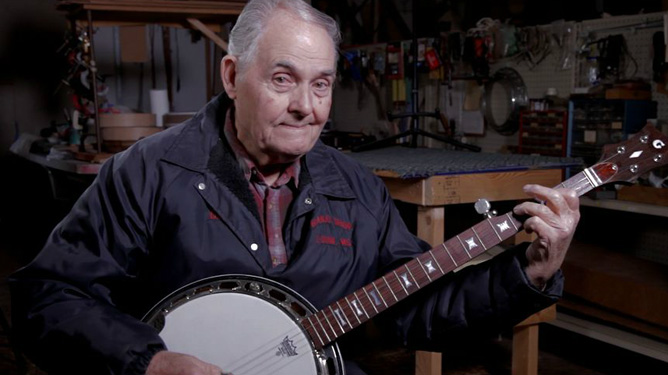 What do a potter, a banjo player and a reverend all have in common? They have all been featured on “Mississippi Stories,” the latest series produced by the University of Mississippi’s Media and Documentary Projects Center in association with the Center for the Study of Southern Culture.

Created by producer-director Rex Jones and MDP director Andy Harper, the visual oral histories offer a glimpse into the lives of Mississippians both well-known and not-so-well-known.

“Andy and I came up with the concept that Mississippi people needed to tell their own stories, and the subjects of these short films are telling them in first person,” Jones said. “They are short films that capture the essence of the person. We wanted to paint a cinematic portrait, so there is a beginning, middle and an end, with plenty of supporting images. They are beautifully shot, compelling stories about the people all around us.”

M.B. Green, an 80-year-old banjo maker and bluegrass musician from Louin, shares his experiences of a self-taught banjo career in “Cherish the Music.”

In the poignant “So Wonderfully Connected,” Merigold’s internationally recognized and award-winning potter Lee McCarty shares insight into his life at McCarty pottery and his late wife, Pup.The third, which Jones is still working on, features the Rev. Samuel “Billy” Kyles, a native of Shelby, who was a longtime leader in the civil rights movement and has been pastor of Monumental Baptist Church in Memphis, Tenn., since 1959. He was on the balcony with Martin Luther King Jr. when he shot.

“When he told that story, I got goosebumps; it is absolutely spellbinding,” Jones said.

Jones worked in the computer industry for 15 years and didn’t know much about making movies. However, the Hickory native was bitten by the documentary filmmaking bug when he decided to make a film about an Aberdeen grave dowser. He earned an MFA in science and natural history filmmaking at Montana State University and made conservation films, but decided he was tired of being physically bitten by those bugs.

“I wanted to tell more interesting stories, and that is our function at Media and Documentary Projects,” Jones said. “With these short films, they can be cinematic, they can have a narrative arc, they can be high quality and it’s a wonderful way to get to know people. I would never have encountered these people otherwise, and I try to learn something from them. Each one enriches my life and my experiences.”

In the future, the plan is for “Mississippi Stories” to be shown on public television.

“As the flagship liberal arts university of the state, we should be engaged in telling stories of the people we serve,” Harper said. “When I hired Rex, I knew he knew Mississippi very well. With the cinema minor and the documentary track in Southern studies, this puts us in a position to teach and train students to do just that. This series is a good first step in Mississippians telling Mississippi’s stories and for the next year, we will be going statewide to get these stories and cover our own state and save them for posterity.”

People are interested in Mississippians and if they take the time to watch the films, they will be moved by them, Jones said.

“It is important to get these stories before they are lost. I’m very personally invested in it and I get a lot out of doing them. When you put it together, you’re never finished but you just say I’m done when it hits you, and the hair stands up on your arms. You never know if it’s going to work, but the serendipitous magic is how it all comes together.”

Other “Mississippi Stories” will feature a 100-year-old Yazoo City native and the Natchez native who was the economic and revitalization powerhouse behind Memphis in May.