The university’s Howry Chair in Faulkner Studies and professor of English delivered the keynote address during the university’s annual Fall Convocation in The Pavilion at Ole Miss. Regularly referring to passages from the 1939 story “Barn Burning,” Watson called on incoming freshmen and transfer students to build new bridges to people with differing perspectives without necessarily burning past connections to their families and traditions.

“The word ‘educate’ means ‘to lead out,’” he said. “Reading Faulkner together educates us. His stories lead us out of what’s familiar to us and into other people’s lives, cultures, perspectives and worldviews.”

Watson noted that even though Faulkner took classes at the university through a special proviso for veterans, he never completed further than eighth grade.

“Ironically, the famous writer made a D in English,” Watson said. “His story ‘The Leg’ is the only one about a college setting. The characters in most of his writings were far from scholarly.”

Watson also said that while Faulkner was definitely a flawed person, he also was a great storyteller whose novels and short stories remain timeless classics.

“Faulkner’s writings made the reading lists of several U.S. presidents, including John F. Kennedy and Barack Obama,” he said.

Watson cautioned the students that they should expect inevitable clashes in perspectives while studying at the university.

“These are ‘growing pains,’” he said. “See these clashes as opportunities to expand your mindset.”

Lastly, the speaker said that listeners should relate Faulkner’s experiences to their own.

“Through his writings, William Faulkner reflected upon his own encounters with radically different cultures while living in Mississippi,” Watson said. “As students at the University of Mississippi, each of you will encounter the same.

“As you share this Common Reading Experience this year, learn from Faulkner the artist, not the man.”

Following the keynote, students received a limited edition commemorative coin as part of the ceremony. 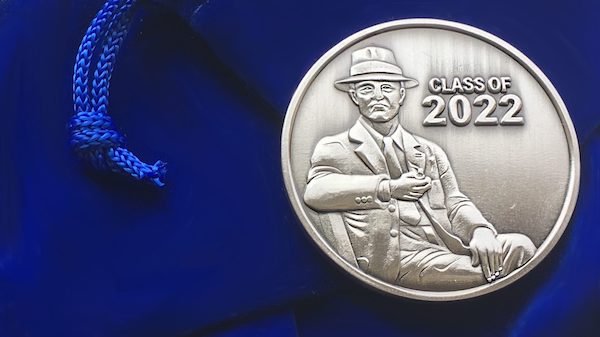 “Every class has its own unique coin,” said Brandi Hephner LaBanc, vice chancellor for student affairs. “The Class of 2022’s coin depicts William Faulkner. I hope you will place it in a special place and let it remind you of why you are here: to graduate from the University of Mississippi and, hopefully, to make your contribution to this great institution as well.”

“The University of Mississippi Creed is a declaration of intellectual ideals by which all those on campus strive to live,” he said. “We hope that you will join us in honoring this excellent tradition.”

Earlier, incoming students received a copy of Faulkner’s “Selected Stories,” which was chosen earlier this year as the 2018 Common Reading Experience. The volume contains 42 of the author’s most poignant tales on a variety of subjects.

Chancellor Vitter encouraged the Class of 2022 to embrace learning about one of the great creative minds of the 20th century offered through the Common Reading Experience.

“The stories will serve as the foundation for discussions in many of your classes and with your peers and instructors,” Vitter said. “Reading these stories together allows our community to engage in thoughtful discussions across a number of themes that inform our very understanding of the human condition.”