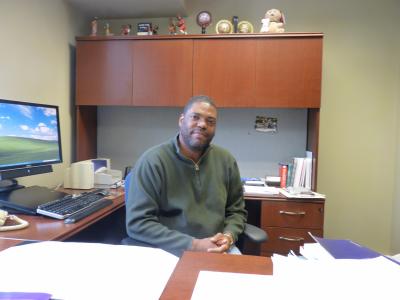 Charles Ross, director of the African American Studies department and associate professor history at the University of Mississippi, never dreamed that football would inspire his thesis.

Raised in Columbus, Ohio, Ross studied history at Stillman College in Tuscaloosa, Ala.

Following his undergraduate program, Ross returned to Ohio. Unsure of what he wanted to do, he spent almost two years working for the federal government before returning to academics.

He completed a master’s degree in black studies, a second master’s in history in 1992 and completed his doctorate on African Americans in sports in 1996 at Ohio State University.

“My professor asked me who was the first professional football player,” Ross said. “I didn’t know, and I decided I wanted to find out.”

This led him to the story of Charles Follis, the first black professional football player who played for the Shelby Blues in Ohio from 1902 to 1906.

His study inspired Ross to publish two books in this field.

His first book “Outside the Lines: African-Americans and the Integration of the National Football League” was published in 2001. He followed it with “Race and Sport: The Struggle for Equality On and Off the Field” in 2006.

It is clear that sports are one of his genuine passions, both in and out of the lecture hall.

“Franco Harris was one of the players involved in ‘The Immaculate Reception’ play in the 1972 playoff game, a phenomenal play,” Ross said. “I have been a Steelers fan ever since.”

Sports aside, Ross made a name for himself in the world of academia and became the director of the African-American studies department in 2003.

“I didn’t think that I would end up in an administrative position,” Ross said. “I stumbled into the position, but it has worked out well for me.”

“As the department grows, there is a strong possibility of a graduate program in the future,” Ross said. “We are the only institution in Mississippi that offers a bachelor’s program in African American Studies, and we hope to expand this.”

Ross said that the South as a region has a lot of potential. While it has a turbulent racial history, Ross feels that people are more open in the South.

“The North is not as honest as the South about racial animosity and problems,” Ross said. “People assume that there are not the same problems as there are in the South.”

While he is aware that it is hard to get away from his identity as a northerner, Ross calls the South his home.

“The positives outweigh the negatives,” Ross said of the adjustments he has made moving from Columbus to Oxford. “There are things I do on a daily basis here, such as leave my car running at the store in the morning, which I would not do in Columbus.”

On a personal level, he hopes to be able to do more teaching and further his research in the future.

“The opportunity to challenge young people and to discuss historical perspectives and issues and how society has evolved — I get a lot of enjoyment from that,” Ross said.

On an institutional level, Ross hopes that the University will continue to makes positive progress in the way it represents itself to black students.

“The University of Mississippi is a state institution,” Ross said. “It has the responsibility to all students, faculty and staff to promote symbols that are not interpreted in a negative way. The University needs to make a positive step because of its past. If it does not, it will restrict potential and growth.”