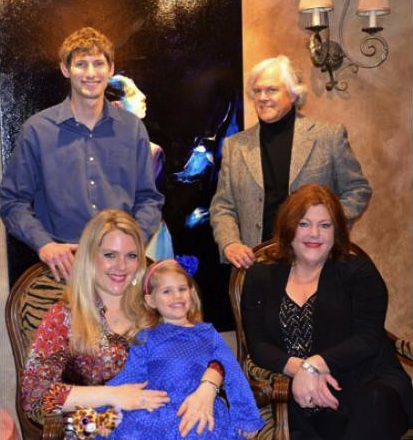 Matthew Hosey, from left, and Ron M. Feder; Elizabeth Feder-Hosey, from left, Evelyn Rose Hosey, and Becky Feder support the Center for the Study of Southern Culture, with their latest $100,000 gift designated for the Music of the South Endowment.

Ask passionate academics about Southern literature, food, music and arts, and the historical impact of this region’s culture, and prepare to hear how the American South’s musicians, cooks, writers and artists have shaken the world and sparked entire movements and new genres.

The influence, identity and individualism yielded over hundreds of years is tremendous, yet academic study and documentation was scarce until the 1970s when University of Mississippi leadership and faculty identified the need and founded the Center for the Study of Southern Culture (CSSC). Now a flagship academic enterprise for UM and a standard-bearer for university Southern Studies curricula, the center is focused on expanding fundraising to create a full professorship for the study of Southern music.

Among the first to support the CSSC’s goal is the Feder family of Ocean Springs, Miss., pledging $100,000 to establish the Music of the South Endowment. Ron and Becky Feder, along with their daughter Elizabeth Feder-Hosey and her husband Matthew, are UM alumni and strong believers in this growing area of emphasis. Having welcomed granddaughter Evelyn Rose Hosey to the family, the Feders are now two generations working to make the future at UM brighter for the third.

“We are extremely grateful for the Feders’ commitment,” said Nikki Neely, director of development for the College of Liberal Arts. “Their ongoing support energizes our efforts to fund a music professorship, an effort that is gaining momentum.”

Serving as chairman of the CSSC’s advisory committee, Ron Feder remembers having the first conversations about increasing resources dedicated to Southern music.

“A time came when we realized that the South was losing lots of musicians. We recognized we needed oral histories, stories and archives,” said Feder. “We started with the blues but grew to include gospel, country, Appalachian hillbilly music and more. The center, with its faculty, students and resources, is the natural place to headquarter the study of Southern music.”

The CSSC has since created the Music of the South conference and concert series in 2012 to supplement existing music-related programs and publications: Living Blues magazine, its Mississippi Public Broadcasting radio segment Sounds of the South, and the longtime Highway 61 Radio program. The inaugural Music of the South concert featured UM Southern Studies alumna Caroline Herring, a Canton, Miss., native known for her folk singing and songwriting.

Supporting the Center and attending its many symposia, conferences and events has become a Feder family affair. Their support of the CSSC began over a decade ago with substantial contributions for the Oxford Conference for the Book, an annual event the CSSC cosponsors with Oxford’s Square Books.

“The Conference for the Book serves to highlight the South’s established authors while also providing a platform for newer writers,” said Ron Feder. “Books are the basis for all entertainment, in my opinion; they inspire musical works, movies and other entertainment. The Conference for the Book encourages people to support good writing; it’s like a pep rally for readers and writers.”

“Ron was the first to become involved with the center,” said Becky Feder. “He brought Elizabeth and me to several events and we were hooked. It’s a wonderful department with smart people who are documenting and celebrating our unique culture.”

Becky Feder has enjoyed participating with the Southern Foodways Alliance (SFA), an institute housed at the center that focuses on another staple of Southern culture, food. “I love to cook and I love to eat, so the SFA is awesome to me,” said Becky Feder. “It’s really become a hot ticket. A bunch of my kids’ friends are chefs now, and we’ve enjoyed introducing them to SFA and seeing them get involved in its mission as well.”

Supporting SFA also entailed a trip to New Orleans in 2005 after Hurricane Katrina to help rebuild Willie Mae’s Scotch House, a restaurant owned by Willie Mae Seaton, one of SFA’s “Tabasco Guardians of the Tradition.” The project included an outpouring of volunteers, oral histories and Above the Line, a documentary film by Joe York, a Southern Studies alumnus who works for the Southern Documentary Project (formerly UM Media and Documentary Projects).

“Right after we gutted our own house in Ocean Springs, we went to New Orleans to volunteer at Willie Mae’s Scotch House,” Becky Feder shared. “I later told them I’d do repair work with them anytime – they had New Orleans’ chef John Besh feeding us lunch! But mostly it was the camaraderie with volunteers from all over the world. Many of them had never encountered anything like Katrina. It was a rewarding experience and though it wasn’t an academic endeavor, I think it’s an example of how far the center expands its definition of protecting and documenting our Southern traditions.”

Feder-Hosey practices law in Ocean Springs like her father and shares her parents’ love for Southern art and music. She received a bachelor’s degree from UM in art history in 2005 and later a Juris Doctor degree from its School of Law in 2009.

“My parents introduced my brother and me to the arts,” said Feder-Hosey. “I frequently raided their music collection, and they also took us to Jazzfest in New Orleans and the Chunky Blues Festival in Chunky, Mississippi. I took some undergraduate classes in Southern Studies. Plus, I spent a lot of free time as a student embracing the Oxford music scene, so I love that the center is taking on music as an area of emphasis.”

In addition, Feder-Hosey recognizes the immeasurable effect and importance of a professorship. “I had professors who pushed me and made me uncomfortable, forcing me to be better at whatever I was doing. That’s what good professors do. I would hope this professorship would serve that same purpose and introduce more of our students to the influence and impact of Southern music.”

Like its other academic offerings in literature, art and history, the center’s music classes and programming will be interdisciplinary in nature, and CSSC Director Ted Ownby anticipates partnering with other campus entities, especially the Department of Music. Thanks to existing faculty in sociology, anthropology, music and English, UM offers courses on blues and literature, blues anthropology and African-American music traditions.

“We are a very interdisciplinary program, so we like things that cut across traditional boundaries and find connections between numerous elements of cultural traditions, as do our students,” said Ownby. “The ideal scholar for this professorship will approach the study of Southern music in a multifaceted way. We are not deciding what type of music is important to study, nor are we looking specifically for a jazz scholar, a blues scholar or a country music scholar. We want someone who cares about how to study music traditions and contemporary music.”

The Feders’ commitment provides a foundation for the professorship, but Ron Feder emphasizes the need for additional support to bring the position to fruition. “We need two types of donors for this endowment: passionate people who can make small, meaningful gifts, and people with the ability to make larger gifts and want to have a guiding role in bringing this new focus to the center.”

Ownby agrees. “We want to establish an endowment that will be stable enough to support this faculty position indefinitely and solidify the groundwork for a program that will grow in prominence and draw the best students in this field. Ron is an invaluable advisory committee member and he and his family have been very active supporters. We can’t thank them enough, and we’re looking for others who share this interest in music as part of Southern culture.”

Feder often uses the Rolling Stones as an example of Southern music’s impact on the world. “We hope that those in the music business who have learned from, been inspired by and benefited from Southern music will support us as we build this program and project the narrative of how Southern music has influenced the world. And of course, there is the story to tell to future generations, especially Southerners. It’s important we know our history.”

But perhaps the second generation says it best. “One of the things all humans have in common is that they recognize music at any age and respond to it,” said Feder-Hosey. “Plus, Ole Miss is in a unique position right now. We boast a lot of very progressive programs that stand out in ways with which other universities can’t compete. Part of that is the Center for the Study of Southern Culture. The center approaches issues and elements of our past in a way that doesn’t shy away from our struggles but highlights the many gifts our culture crafted and even those we are still creating. I’m honored my family can play a role in that.”

Both the Center for the Study of Southern Culture and the Music of the South Endowment are open to receive gifts from individuals and organizations by sending a check with the fund noted in the memo line to the UM Foundation, P.O. Box 249, University, MS 38677, contacting Nikki Neely at 662-915-6678 or nlneely@olemiss.edu, or by donating online at www.umfoundation.com/makeagift.