Tim Earley is the 2015 recipient of the Mississippi Institute of Arts and Letters poetry award.

University of Mississippi English instructor and former graduate student Tim Earley is among the 2015 honorees in the Mississippi Institute of Arts and Letters‘ awards program.

The organization honors the state’s best writers, artists and musicians in seven categories with its MIAL Awards. Earley is the recipient of this year’s poetry award for his book Poems Descriptive of Rural Life and Scenery (Horse Less Press, 2014).

Living in Mississippi has greatly influenced his work, said Earley, who moved to Oxford in 2007.

“Interacting with the wonderful young writers the university’s MFA English Program brings to Oxford, closely engaging with the work of Mississippi writers like Barry Hannah and Larry Brown, taking Friday night sojourns down to Red’s Lounge in Clarksdale, and teaching both in Oxford and at our outreach campuses in Grenada and Tupelo have brought me into close contact with the abiding creative and cultural energy this state breeds,” Earley said. “Living here has allowed me to write about my own postage stamp of native soil, the former textile mill communities in the foothills of North Carolina, with more clarity and intensity.” 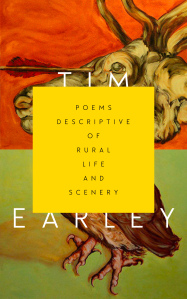 “Part Henry Miller, part Rimbaud, part Whitman, part Joyce, all swirled into the ‘poor, rude clown’ of mad John Clare resurrected and rampaging through the ‘post-natal slime’ of the American South, Tim Earley reinvents or damn near obliterates the prose poem in ‘Poems Descriptive of Rural Life and Scenery,’” Koo said. “Every sentence in this book is alive and creepy-crawly with creation, belying the book’s title, because there is nothing ‘descriptive,’ but detonating, about what these poems do to the language and landscape. … This is a book like no other.”

Earley is a strong member of Oxford’s literary community, said Beth Ann Fennelly, associate professor of English and director of the MFA program.

“This award is our most important statewide award, and we are very proud that one of our former MFA students has won this,” Fennelly said. “Tim makes a big impact on the University of Mississippi in many different ways and the book for which he won the award is deserving of the highest praise.”

Earley will be presented his award during a ceremony June 6 in Hattiesburg.