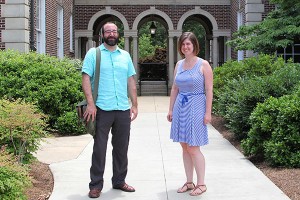 Brian Cook and Helen Davies, recipients of fellowships from the National Endowment for the Humanities, head to Britain this summer to study medieval literature.

Two doctoral students from the University of Mississippi Department of English are studying medieval literature this summer in Britain, thanks to fellowships from the National Endowment for the Humanities.

Helen Davies and Brian Cook will have firsthand access to medieval archaeological sites, sculptures, manuscripts and texts, and a rare opportunity to extend beyond their curriculum at UM to work with top scholars in Celtic studies across the Atlantic.

They will embark on a monthlong journey through Belfast, the Isle of Man and Glasgow in a unique, interdisciplinary training environment across such fields as literature, history, linguistics, art and art history, and archaeology.

Davies and Cook are doing innovative work that speaks to the goals of this NEH seminar and they will absorb a myriad of benefits in their fields of study from the experience, said Lindy Brady, assistant professor of English.

“This NEH seminar in particular stresses the multicultural nature of early medieval Britain,” Brady said. “It is an under-explored area of study in which Brian and Helen are both doing exciting work.”

Cook, a Chicago native, is working on a dissertation focusing on literary representations of the past in the medieval literatures of the early British Isles. He has worked with literature written in Old and Middle English, Medieval Irish, Medieval Welsh, Old Norse and Insular Latin.

Having the chance to reread and discuss medieval texts such as “Beowulf,” “Njáls Saga,” the “Táin Bó Cúailnge,” “The Mabinogion” and the works of the “Pearl” poet as part of the medieval culture they existed in and discover aspects of cultural exchange throughout compelled Cook to apply for the fellowship, he said.

“This is the ideal seminar to prepare me for the kind of scholar I see myself becoming,” Cook said. “My primary interest is in the multicultural Middle Ages, specifically the multilingual British Isles where a number of Celtic languages exist alongside Old English, Old Norse, Latin and, after the Norman invasion, Anglo-Norman.”

After the monthlong seminar, Cook plans to stay in Glasgow to present at the 15th International Congress of Celtic Studies hosted by the University of Glasgow before heading off to an intensive modern Irish language immersion program in Galway.

Davies, a Cincinnati native, is just beginning her dissertation project, which combines literary studies and digital humanities methodologies in examining early medieval literary and visual representations of space and place.

She wants to experience medieval texts in conjunction with the surrounding landscape with new scholars, and to acquire a greater understanding and appreciation for medieval documents through intellectual discussions with experts in the field.

“The fellowship presents a rare opportunity to gain a specific knowledge of how medieval texts interacted with each other and the landscape across cultural boundaries throughout the British Isles,” Davies said. “Additionally, it provides a unique chance to witness firsthand the preservation of medieval manuscripts and artifacts.”

Once Davies’ seminar is finished, she also plans to present at the 15th International Congress of Celtic Studies before taking her place in the Mellon-funded York Archbishop’s Registers Revealed Summer Institute, which will keep her studying abroad until early August.

According to Brady, these NEH summer seminars are usually awarded to experienced college and university professors, so Davies’ and Cook’s acceptances as doctoral students speaks to the advanced nature of their research agendas and the strength of their applications.

“Most of the other participants in this NEH seminar will be college or university professors already,” Brady said. “The benefits to Helen’s and Brian’s futures as scholars and teachers will be innumerable, and I could not be more proud of these two exceptional students for this remarkable achievement.”

Ivo Kamps, chair and professor of English, said he cannot recall an instance in the last 25 years where two grad students were offered an NEH fellowship, which makes their accomplishments even more remarkable.

“It’s incredibly impressive that Helen Davies and Brian Cook are being given the opportunity to travel to Great Britain to study with expert medievalists,” Kamps said. “It speaks to Davies’ and Cook’s advanced level of preparedness, and to the outstanding work done by our medieval studies faculty – Drs. Lindy Brady, Mary Hayes and Gregory Heyworth – to prepare them for this professional opportunity.”