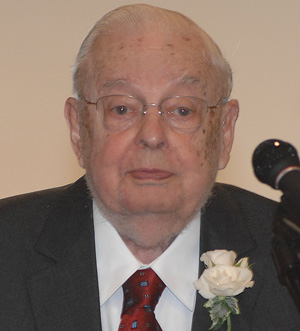 During his 33-year teaching career at the University of Mississippi, John Pilkington influenced hundreds of students, inspired faculty colleagues and filled key leadership roles. Following his retirement in 1985, he continued his early mission of raising funds and friends to help make the university library the best that it can be.

The revered professor is being remembered by many as a beloved and devoted Ole Miss friend and supporter.“It’s hard to imagine Ole Miss without John Pilkington,” said Chancellor Emeritus Robert Khayat. “In addition to being a much-loved and respected professor, he and his longtime friend Dr. (Charles) Noyes were the leaders in seeking much-needed support for the J.D. Williams Library, and it’s hard to remember a time when we were not receiving letters asking for donations for books and other support. I knew many of his students, and they loved and respected him.”

Pilkington was the senior professor of American literature in the Department of English from 1960 to 1985. He taught one of the first university courses devoted solely to William Faulkner and was a moving force in establishing UM’s annual Faulkner Conference. He designed many new classes, directed many doctoral dissertations and master’s theses, and developed and taught correspondence courses, for which he won a major award from the National University Extension Association.

When Pilkington joined the UM faculty soon after completing his master’s and doctoral degrees at Harvard, he was alarmed at the state of the library, and he wasted no time in seeking ways to remedy the situation. He was honored for his service in 2009, with dedication of the library’s John Pilkington Study Room, a project that was spearheaded by libraries Dean Julia Rholes and several of his longtime friends.

“All the university library staff are saddened by Dr. Pilkington’s passing,” Rholes said. “He was a steadfast champion of the libraries. As a scholar and teacher, Dr. Pilkington believed that you could not have a great university without a strong library collection, and as president of the Friends of the Libraries, he worked tirelessly for years to help build our collections.”

Pilkington held a bachelor’s degree with highest honors from Centre College, with majors in English, history and French. He attended Johns Hopkins University as a graduate student in English for the academic year 1940-41. Early in 1942, he was commissioned in the Naval Reserve and served throughout the war, reaching the rank of lieutenant commander. He soon continued his graduate studies at Harvard, earning both master’s and doctoral degrees.

Among those in Pilkington’s UM family who knew him best is Gerald Walton, his former student and later faculty colleague.

“John was well educated, a lover of learning at all levels, a distinguished scholar, a lively and humorous conversationalist, a world traveler, a devoted friend of the library, a thoughtful and considerate colleague, and a really, really good friend,” said Walton, provost emeritus, vice chancellor emeritus of academic affairs and professor emeritus of English. “The Oxford-University community will miss him greatly. Julie and I are in mourning.”

In 1977, Pilkington was named one of the university’s first two Distinguished Professors. He was recognized for his extraordinary service, which included everything from serving as amateur architect for Bishop Hall to developing the school’s first Doctor of Arts program. He served seven years as associate dean of the Graduate School, helping set school policies and maintaining its standards.

As a scholar, Pilkington published numerous articles in professional journals and served with regional and national academic organizations. His work includes “The Heart of Yoknapatawpha,” a study of Faulkner’s Yoknapatawpha novels, and books on novelists Francis Marion Crawford and Henry Blake Fuller, and a biographical and critical study of Southern literary renaissance leader and Mississippi native Stark Young. He had earlier published a two-volume collection of Young’s correspondence, “Stark Young: A Life in the Arts,” which earned the prestigious Jules F. Landry Award and was nominated for the J. Franklin Jameson Prize.

In lieu of flowers, memorials may be sent to the John Pilkington Library Endowment Fund, P.O. Box 249, University, MS 38677.