Department of Theatre and Film Gets Showcase at Oxford Film Festival 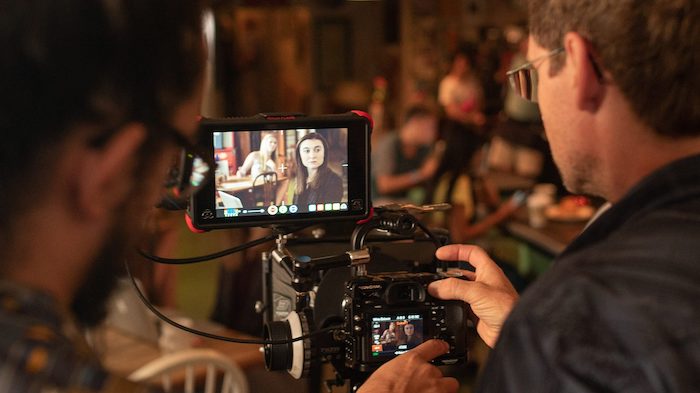 UM film production professor Harrison Witt (right) works with cinema student Sam Cox to set up a shot for Witt’s short film ‘MANGRY.’ A teaser for the film will screen during the ‘Ole Miss Theatre & Film Presents’ block in the Oxford Film Festival on Feb. 9. Photo by Chris Floyd

A rising new cinema star will debut at next week’s Oxford Film Festival: the University of Mississippi Department of Theatre and Film.

“Ole Miss Theatre & Film Presents,” a block of films curated by the faculty of the department’s new film production emphasis, in its second semester, will screen Saturday (Feb. 9); the festival runs from Wednesday (Feb. 6) through Sunday (Feb. 10).

“We were trying to think about how we could be involved not just with the university community, but with Oxford and the state of Mississippi,” said Harrison Witt, assistant professor of film production.

“So we met with Melanie (Addington) and came up with this idea to have the department curate a block of films during the festival.”

Addington, who has worked with the festival since 2006 and served as its executive director since 2015, also teaches a festival programming class in the university’s interdisciplinary cinema minor and wanted to increase collaboration between the department and the festival.

“I just thought there were lots of ways we could get the program involved,” Addington said. “So we met, and they pitched the idea of doing the block, which I loved.”

“This is the first year that we’ve moved forward with the idea of bringing filmmakers in our small program into the larger festival community,” added Alan Arrivée, associate professor of film and head of the film production emphasis within the BFA in Theatre Arts degree.

The films for “Ole Miss Theatre & Film Presents” were chosen by the faculty from among past projects done at the university as well as entries to the department’s annual UM Film Festival, which last year moved from the spring to the fall in order to facilitate more participation in the larger Oxford festival.

The selections range in style from narrative and documentary to music video and experimental and were created by current and former UM students, faculty and staff – from both within the department and outside. Two members of the film faculty, Sarah Hennigan and Harrison Witt, will premiere films, and Witt has a film in competition.

Also included in the block are several noteworthy entries from the UM Film Festival’s One-Minute Film Competition, which debuted in October 2018 and was open to high school students from both within and outside the state.

A comprehensive listing of films can be found on the festival’s event website.

Besides the block of films, a special panel, called “Film School Confidential,” will feature a diverse array of people involved in the film world. Confirmed panelists include film production faculty members Arrivée, Sarah Hennigan and Witt; students EmilyFaye Cobb and Brady Shorter; guest filmmakers Mira Lippold-Johnson of the University of Texas and Geoff Marslett of Carnegie Mellon University, both of whom have short films in the festival; and Andy Harper, director of the Southern Documentary Project at the UM Center for the Study of Southern Culture.

While the university community is abundantly represented in the department’s block of 19 films, several film students and past UM Film Festival participants are screening works outside the block, in the overall Oxford Film Festival – which meant, in some cases, a friendly tug-of-war between the department and the festival over which films would screen when.

“Melanie gave us full license to choose all the films for our block,” Witt said. “The cool thing is that she wanted to play a lot of the same films in the festival at large.”

Lucinda Roberts is a sophomore in her second semester with the first cohort of the film production program, and her short film “Hats Off” was filmed at her house using actors from the theatre arts major. The one-minute film, which premiered at the UM Film Festival in October, will screen in the Oxford festival’s “Community” block, which kicks off the festival Feb. 6.

“I thought that was pretty cool, though I wasn’t sure why at first,” said Roberts, who also interns with the Oxford Film Festival. “They’re trying to show everybody in the community, including the students, so I was chosen to represent the students in the ‘Community’ block.”

Wednesday’s two-hour segment is sold out and standing-room-only.

Roberts also serves as a liaison between the Ole Miss theatre and film department and the festival.

“Both Harrison and Melanie communicated to me that they’d like for me to be a go-between, which I really appreciate because it involves a lot of trust,” Roberts said. “I’ve been talking to students about how the internship works and encouraging them to get into it.”

Students outside the film program are benefiting from the collaboration as well. Jonathan Smith, a graduate student in the Southern studies MFA program in documentary expression, has three films screening in the Oxford Film Festival – one in “Ole Miss Theatre & Film Presents” and two in the festival’s “Community” block.

Smith had already submitted one film – “Taming the Tarasque,” which investigates local food webs by following a single dish from the Oxford restaurant Tarasque from conception to completion – when he learned that all top finishers in the UM Film Festival would have entry fees waived to the Oxford Film Festival. His film “Ghost Train,” which he created specifically for the Ole Miss festival’s one-minute competition, had won a prize in the fall, so he took advantage of the fee waiver to submit it to the Oxford Film Festival.

“The one-minute film was different from anything else I’ve done,” Smith said. “I think I called it ‘the memory of a memory.’… It was really fun because I got to play with forms, and it’s a lot more visual. … It’s probably going to have the most impact on my thesis film.”

Smith, who is in his fourth semester of the two-year MFA program, hopes to continue making films professionally after graduation, ideally working for a documentary production company or for a nonprofit doing outreach films.

Making it in film production is something alumni Jordan Berger, Gavin Fields, Houston Settle and Daniel Russell, who have two films screening in the festival, might know a little bit about. The foursome – three of whom have theatre arts degrees and all of whom studied with Arrivée – run the production company Deer Run Media, based in Chattanooga, Tennessee.

“I love the fact that numerous filmmakers are continuing their relationship with the university and going on to show what they’ve done since graduating by submitting from afar,” Arrivée said. “It’s wonderful to see how far people have come.”

“Ole Miss Theatre & Film Presents” will screen beginning at 11:45 a.m. Feb. 9 at the Malco Commons theater on screen one. The film block and panel discussion are free to attend.