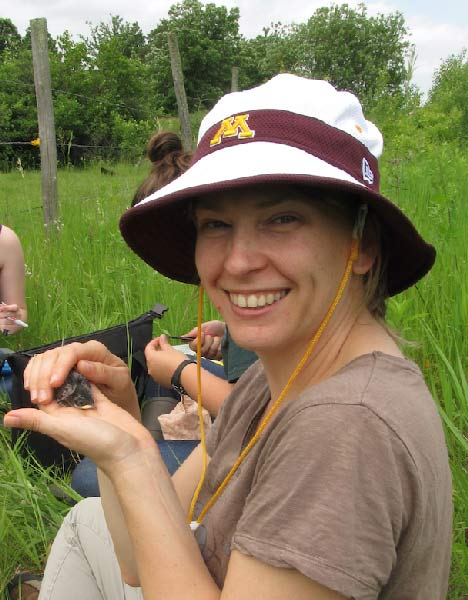 Susan Balenger, UM assistant professor of biology, holds a nestling bluebird at the the Itasca Biological Field Station in upstate Minnesota. She will discuss the decline of chirping by male crickets in Hawaii during the last Oxford Science Cafe of the fall semester. Submitted photo

The rapidly diminishing ability of male crickets in Hawaii to chirp, which is part of their mating ritual, is the topic of the final Oxford Science Cafe of the fall semester.

The monthly event, sponsored by the University of Mississippi Department of Physics and Astronomy and the Office of the Provost, begins at 6 p.m. Nov. 19 at Uptown Coffee on the Oxford Square. Susan Balenger, assistant professor of biology, will discuss “The Silence of the Crickets: Rapid, repeated loss of sexual signals in Hawaii.”

“Charles Darwin was convinced that biological evolution only occurred over long geologic timespans,” Balenger said. “More recently, though, researchers have been watching and documenting evolutionary changes happening over human timescales.”

Balenger’s 45-minute presentation includes insights from her studies of rapid evolution amongst wild populations of field crickets on the islands of Hawaii. She will include a slide presentation, some short videos and cricket song clips.

“The cricket populations in Hawaii provide a beautiful example of what is called ‘rapid evolution,’ an obvious evolutionary change in just a few generations, and the opportunity to study them was a thrilling prospect,” she said. “Basically, males on several of the islands have lost their ability to sing as a defense mechanism against a parasitic fly from North America that uses male cricket song to find a host.

“It is such a spectacular example of evolution in the wild that it is now considered a textbook example.”

Balenger will discuss how and why interactions between these species could produce silent crickets, the ways that cricket mating behaviors have subsequently changed and what it is like to watch evolution in action.

“We look forward to hearing about Dr. Balenger’s research,” said Lorena Magana Zertuche, co-coordinator of the event. “Evolution is something we associate with long timelines, so learning about species that can evolve within our human lifespan is fascinating.”

Balenger began studying sexual signaling in Hawaiian crickets in 2012 during her postdoctoral time at the University of Minnesota at Twin Cities. Her primary research interest is in how parasites influence the evolution of sexually selected traits – such as the song male crickets sing to attract females – in the wild.