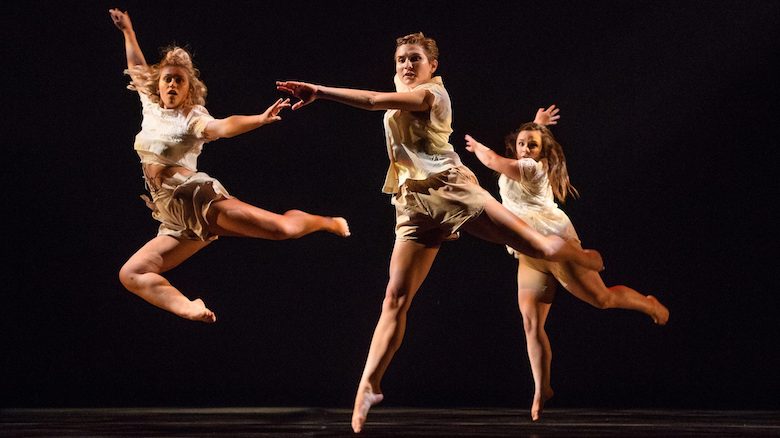 In Greek mythology, Terpsichore is known as the goddess of dance. So it is only fitting that she should make an appearance at this year’s annual showcase from the University of Mississippi‘s resident modern dance company, Mississippi: The Dance Company.

“Calling Terpsichore!” will open in Meek Auditorium at 7:30 p.m. Friday (Feb. 22), with additional performances at 7:30 p.m. Saturday (Feb. 23) and 2 p.m. Sunday (Feb. 24). The opening night performance will be followed by a reception at the Oxford-University Depot.

The show’s title appeared in a flash of inspiration while Jennifer Mizenko, professor of movement and dance and the company’s artistic director, was having lunch with adjunct dance professor Roxie Clayton.

“We said, ‘What if we’re just calling Terpsichore to bless us and make our dance concert great?’” Mizenko said.

The pieces range in style from ballet to modern, including a form of physical theater improvisation that uses the concept of Rasaboxes, a tool that builds upon the Sanskrit word “rasa,” meaning “flavor,” to create spaces that allow performers to embody a set of emotions.

“It’s a structured improvisation; they have a very specific structure within it, but exactly what happens changes, and they’re using text from the play ‘Waiting for Godot’ as part of it,” Mizenko explained.

A highlight of this year’s concert is a piece titled “Qué No Daría Yo” by special guest choreographer Eric Rivera, an assistant professor of dance at Virginia Commonwealth University, who, during his performing career, danced for 13 seasons with Ballet Hispánico of New York.

The title translates to “What I Wouldn’t Give.” A native of Puerto Rico, Rivera said that this piece, like several he has created recently, arose out of the thoughts and emotions he’s had in the 18 months since Hurricane Maria tore through Dominica and Puerto Rico, killing thousands and causing the worst electrical blackout in U.S. history.

“It’s taken me this long to actually create something that was directly connected with what happened,” Rivera said. “It was my way of expressing how my brain was feeling within the last year-and-a-half.”

Rivera meant that literally: the piece is a visual expression of the many thoughts that have been swirling in his head in the wake of the hurricane.

“One of the dancers is the main character, and it’s her thoughts, the things she is thinking about throughout the 10 minutes that the piece is going on. The other dancers can be her thoughts, or things she’s seeing or remembering.”

The movements of the dancers and their proximity to one another are indicators of what types of thoughts they are and their meaning to the main character. And though Rivera may have had specific thoughts in mind when creating the piece, he didn’t assign specific roles to the dancers.

“We sat down and had some conversations, but sometimes I don’t like to be so specific, because dancers tend to start acting, and I want dancers to react, to find a natural way of expressing something,” he said.

Rivera visited the Ole Miss campus in January to work with a half-dozen dancers who’d committed a week of their winter break time to study and rehearse for six hours per day, Sunday through Friday.

For Rivera, the intensive time to work with the dancers was critical to the development of the piece itself.

“It’s always a collaboration with me and the dancers, what they can offer, what they bring to the table,” Rivera said. “Some things, I literally change on the spot, because I like to work with the facilities and abilities of each dancer I get to work with.

The program also features a reprisal of a 2004 piece titled “Before Now and After Then,” which was created by guest choreographer Dwight Rhoden during a monthlong residency, The Racial Reconciliation Choreography Project, in honor of the 40th anniversary of James Meredith’s admittance to the university. The piece was honored by the American College Dance Association and performed at the Kennedy Center for the Performing Arts.

The performance will run approximately 90 minutes. Tickets are available through the Ole Miss Box Office or by calling 662-915-7411.