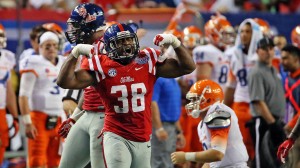 D.T. Shackelford during the University of Mississippi vs Boise State 2014 Chick-Fil-A Kickoff Game at the Georgia Dome in Atlanta, GA.

“It’s hard for me to express how excited I am to announce Deterrian Shackelford as the 2014 Wuerffel Trophy winner,” said Wuerffel. “This young man truly exemplifies not only all that is good about football, but the important and positive aspects of life.”

Shackelford has two degrees from the University of Mississippi, a bachelor’s degree in history and a master’s degree in higher education, and has continued taking graduate classes this fall. The Decatur, Alabama, native has helped lead two mission trips to Haiti and Panama while also mentoring local youth. He has been actively involved in the Oxford community, helping lead efforts to fight hunger and raise funds for cancer research. He is also a highly sought-after speaker for school, community and church groups. The Rebels’ starting middle linebacker is a five-time selection to the SEC Academic Honor Roll, a two-time semifinalist for the National Football Foundation Scholar-Athlete Award, a two-time member of the SEC Community Service Team, and all while currently helping Ole Miss to lead the nation in scoring defense, as the Rebels allow just 13.8 points per game to opposing teams.

This is the 10th anniversary of the Wuerffel Trophy, an award named after Wuerffel, the 1996 Heisman Trophy winner who led the Florida Gators to the 1996 national championship, played six years in the National Football League and has received national recognition for his humanitarian and community service efforts with Desire Street Ministries, in New Orleans and around the country.
The 2014 Wuerffel Trophy will be presented to the winner at the All Sports Association’s 46th Annual Awards Banquet on February 13, 2015, in Fort Walton Beach. For more information on the Wuerffel Trophy, visit www.wuerffeltrophy.org.