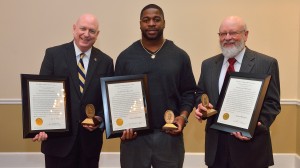 The McLean Institute for Public Service and Community Engagement at the University of Mississippi has named student-athlete Deterrian Shackelford (BA history ’12) and alumnus Darryail Whittington the winners of its 2015 Algernon Sydney Sullivan Award.

They were honored with Chancellor Dan Jones on Tuesday (April 14) afternoon at the Celebration of Service at the Inn at Ole Miss.

The Sullivan Award is the university’s highest honor in recognition of students, alumni and community members who distinguish themselves with selfless service to others.

“Recognizing and celebrating service is crucial to the mission of the McLean Institute, which supports transformation through service,” said Albert Nylander, McLean Institute director. “The Sullivan Award is an opportunity to honor students and community members who have made our community a better place because of their humble service to others.”

Shackelford, a graduate student from Decatur, Alabama, is active in the community, often speaking to community, school and church groups. He has also helped locally in fundraising for cancer research and helped lead efforts to fight hunger.

A linebacker for the Ole Miss Rebels football team, Shackelford has led two mission trips, one to Haiti and another to Panama. He has been a two-time member of the SEC Community Service Team and was the 2014 recipient of the Wuerffel Trophy, an award given to the FBS football player exhibiting exemplary community service.

Shackelford said he lives his life by trying to put other people before himself.

“It is always good to look at others before you look at yourself,” he explained. “That’s often missed in today’s society.”

Shackelford added that he returned from his mission trips with a new perspective.

“When you realize what America has, it’s a blessing,” he said. “I was able to see those people smile in the midst of despair and place value on the little things in life. Their joy system is on a whole other level. Now, I try to look at the joy in every situation. I expected to encourage them, but they encouraged me.”

He has a bachelor’s degree in history and a master’s in higher education from UM and continues to take graduate courses.

Whittington has provided decades of service to the Lafayette-Oxford-University community, but helping others was ingrained in him at a young age.

“I grew up in a small community in south Mississippi,” he said. “When we saw or heard of anyone in our community who needed help, or drove by and saw that they were involved in a big project, we would stop and lend a hand.

“When my Dad was building our home, all of my uncles, cousins and neighbors would simply arrive, without being asked, ready to work. Not only were they ready to work, but when the lunch hour arrived, there would be food waiting for all, provided not only by my family, but by neighbors from around the community. There was always hard work to do, but it was working together that made our small community better.”

Whittington was a member of the Kiwanis Club of Oxford for more than 20 years, receiving the Kiwanian of the Year Award and the Legion of Honor Award. He has been a member of the board of trustees for the Oxford-Lafayette County Library for more than 30 years and a founding member of the Oxford-Lafayette Long-Term Recovery Committee, a group that provides assistance to families after natural disasters. Whittington is also a member of a similar organization, the Lafayette County Medical Reserve Corps, which provides training and education for health and environmental emergencies.

He began volunteering with Habitat for Humanity 30 years ago and has been involved in the construction of seven of the 14 Habitat homes in Lafayette County. Following his retirement from the Mississippi Department of Environmental Quality in 2007, Whittington also helped as local facilitator of Mothers Against Drunk Driving by scheduling speakers and volunteers to register participants who are ordered by the court to attend meetings. He was also named Oxford-Lafayette County Chamber of Commerce’s Citizen of the Year in 2005, is an active member of Oxford-University United Methodist Church and is a volunteer with Interfaith Compassion Ministry.

A Jackson County native, he served in the U.S. Navy from 1967 to 1971. Following his service, he earned a bachelor’s degree in biology from the University of Southern Mississippi and a master’s degree in freshwater biology from UM. He and his wife, Joyce, have lived in Oxford for more than 40 years.

Whittington said he is honored to receive this award and encourages others to get involved.

“If you want to become involved in our community, to feel more like you are a part of what the community is, and even to show people how important an issue is to you, you are in a perfect place to do it,” he said, adding that just talking to people can present opportunities. “You can volunteer one hour, one time, or you can volunteer consistently. Volunteering is easy. Everyone has a gift, and there are plenty of people in our town and university who can help you find it.”

Chancellor Dan Jones also was honored at the event for his vision of transformation through service and lifelong example of enhancing the well-being of others.