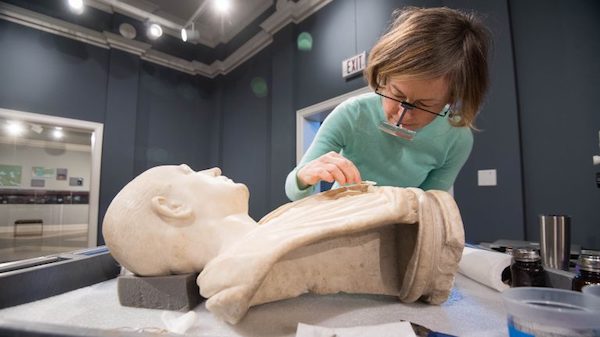 Conservator Amy Jones Abbe gives the Bust of an Unknown Roman a careful cleaning as part of her residency at University Museum. Photo by Kevin Bain/Ole Miss Communications

Amy Jones Abbe, one of the country’s most respected conservators of Greek and Roman sculpture, enjoyed a brief residency at the University of Mississippi Museum last week.

The Athens, Georgia, resident divided her time between restoring three busts in the museum’s David M. Robinson Greek and Roman Antiquities Collection and speaking about her work to inquisitive Ole Miss and local elementary school students.

“This has been a real pleasure for me,” Abbe said, taking a brief break from cleaning the Bust of an Unknown Roman, a marble head dating to 90-120 A.D. in Tivoli, Italy. “I love working on ancient antiquities, and was thrilled when I was extended the invitation to come here.

“The Robinson Collection has a lot of great pieces. I don’t find many such collections in the South, so this makes me very happy.”

With a lighted magnifying glass mounted to her own head and small vials containing various cleaning solutions nearby, Abbe gave painstakingly slow and meticulous care to the bust as it laid on a gurney in the museum’s Mary Buie Gallery. She explained the conservation treatment process.

“I begin with a surface cleaning, followed by testing a range of cleaning options, choosing the mildest and most effective one,” Abbe said. “I vacuum, dust and use a water-based solution that is slightly alkaline. If the conservation merits something stronger, I use an ammonium nitrate solution.”

Depending on a variety of factors, such as the quality of the stone, contaminants and their combinations, she may use soft vinyl erasers at some point in the process.

“It’s rare for anything to be uniformly soiled,” she said. “Environmental pollution is often acidic and can etch the marble over time. These pieces are not too dirty at all.”

Once the sculpture was clean, Abbe addressed areas that needed retouching.

“The trick is to maintain the piece after it has been treated,” she said. “The more regularly conservation is done, the less likely there will be preservation issues.”

Besides working on the busts, Abbe made several presentations to Ole Miss faculty and students, as well as Oxford elementary school students. She spoke to UM Roman archaeology and art history classes and the Vasari Society, a campus art history club, and ended her time in Oxford with a public talk about her work Friday afternoon at the museum. 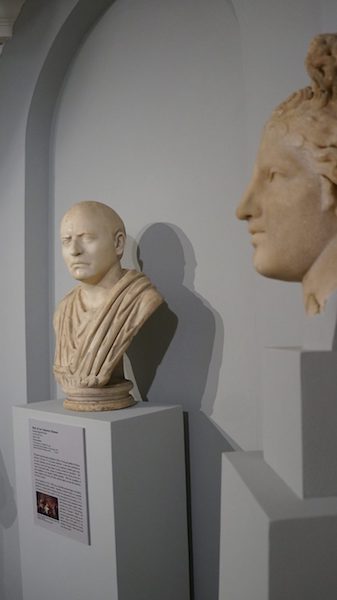 Several marble busts are among the more than 2,000 items in the Robinson Greek and Roman Antiquities Collection in the University Museum. Submitted photo

UM faculty members who attended Abbe’s presentations gave rave reviews for them and her work.

“I’m thrilled that my students got a chance to see this work in action because conservators are always behind what people see when they go to museums,” said Jacqueline Dibiase, assistant professor of classics. “Hopefully, this experience has given them a deeper appreciation for the antiquities collection here at the University Museum. Perhaps some of them might even consider becoming conservators themselves one day.”

Aileen Ajootian, professor of classics and art, said Abbe’s work has been “remarkable and inspiring.”

“The role of a conservator is critical to any museum,” she said. “The university has a lot of wonderful antiquities that have not seen attention for a long time.

“What Ms. Abbe has done already has been remarkable. And for the students to see a conservator in action has been really inspiring.”

Students seemed likewise impressed with Abbe and her work.

“I thought she was really great,” said Hunter Myers, a senior classics major from Mountain Home, Arkansas. “Until today, I wasn’t aware of how many important pieces, particularly the Head of Aeschines, the museum had.

“Being a classics major, seeing these sculptures and hearing about how they are preserved has definitely made me think differently about a lot of things.”

“What she discussed matched perfectly with what I’ve been studying,” said the junior anthropology and biology major, who also is pursuing a minor in classics. “Seeing the intersection of art history, fine art and chemistry involved in being a conservator has made me consider it as a career possibility after I finish graduate school.”

Abbe was particularly enthusiastic about speaking to students, both young and older.

“I want the children to discover that conservation exists and how important it is to keeping the statues they see in good condition,” she said. “I’m glad to be a part of broadening their perspectives and letting them see the enormous varieties of experiences the world has to offer.”

As for the university students, Abbe remembered her own undergraduate exposure, which eventually led to her present occupation.

“I really discovered my love of sculpture in college while taking a classics course as an elective,” Abbe said. “I was a pre-med major at the time, but after taking that course, I switched to classics. I participated in an actual excavation and really loved it.”

By the time she finished her degree at New York University, Abbe knew she wanted a career in classical antiquities, but not as an academic.

“I moved to Washington, D.C., and began working in museums,” she recalled. “That led to me earning my graduate degree at the University of North Carolina (at) Chapel Hill and becoming a conservator.”

This is the first conservation work performed on the museum’s collection in more than 20 years, said Melanie Munns, antiquities collections manager. Hopefully, it will not be the last.

“The University Museum is only able to conserve objects as funding permits,” Munns said. “We started a conservation fund dedicated to the Robinson Collection five years ago with an initial donation gifted by the Daughters of Penelope, Memphis chapter.

“It is with their accrued donations, funds from the Robinson Reinstallation Project and the Friends of the Museum that we are able to conduct this conservation work.”

The Friends of the Museum has pledged further funding for conservation that should allow work to be performed on another piece, possibly more, in coming months, Munns said.

“We hope to perform annual conservation work,” she said. “With over 2,000 objects in the Robinson Collection, we foresee this type of programming could continue for many years to come.”

Abbe is also cleaning two Greek vases from the UM collection at her Georgia studio. If the conservation efforts continue, she would gladly return to campus.

“Oxford is a lovely place,” she said. “Coming back here to do more of what I love doing would be a dream come true.”