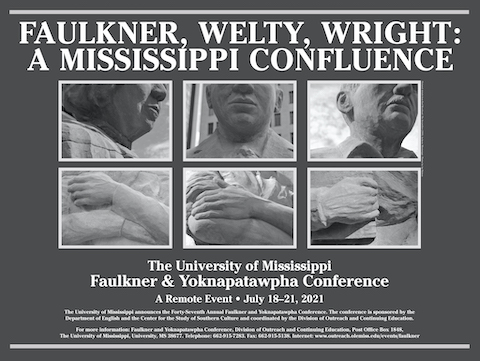 Focusing on the theme “Faulkner, Welty, Wright: A Mississippi Confluence,” the virtual international conference includes four days of lectures, panels and other presentations. All keynote presentations, panels, film screenings and teaching sessions will be held as Zoom meetings or webinars.

“For the first time in the 47-year history of the Faulkner conference, we’re moving the event off its single-author footing in order to take on the work of two other giants of 20th century Mississippi literature,” said Jay Watson, Howry Professor of Faulkner Studies and conference coordinator. “We think the possibilities for comparative perspectives on the work of the three authors are really exciting. They represent an entirely new direction for this conference.”

Keynote speakers and topics for the conference include:

This year also marks the inaugural Ann J. Abadie Lecture in Southern Studies at the conference. This lecture series is sponsored by the Center for the Study of Southern Culture and honors its longtime associate director, Ann Abadie, who was also a founding figure of the Faulkner conference and a co-editor of dozens of the volumes of conference proceedings published by the University Press of Mississippi.

“Our first Abadie lecturer is the distinguished poet Natasha Trethewey, a Mississippi native and eminent writer who is supremely qualified to speak about the great trio of Mississippi writers who preceded her,” Watson said. “Professor Trethewey will read from her poetry and offer some remarks on the role that Faulkner, Welty and Wright have played in her life and work.”

Watson said he hopes to deepen understanding of Faulkner’s work by placing it in the context of Mississippi literature itself, especially as represented by the two other major figures from the state’s literary history whose careers overlapped with Faulkner’s own.

“Bringing the three together will give us a more prismatic view of Mississippi’s and the South’s – and the nation’s – history, society and culture than we could get from any of the three writers alone,” he said. “By summoning Welty and Wright to help illuminate Faulkner, we’ll also, of course, at the same time, be using Faulkner to illuminate Welty and Wright, and the latter two writers to illuminate each other.”

Registration for the four days of events is $100 per person and $50 for students. It’s also possible to register for a single day of the conference, also for $50. Conference registrants are encouraged to upgrade to the latest version of Zoom software before the conference begins.

To register and for more information, visit http://www.outreach.olemiss.edu/events/faulkner/ or contact Jay Watson at jwatson@olemiss.edu.