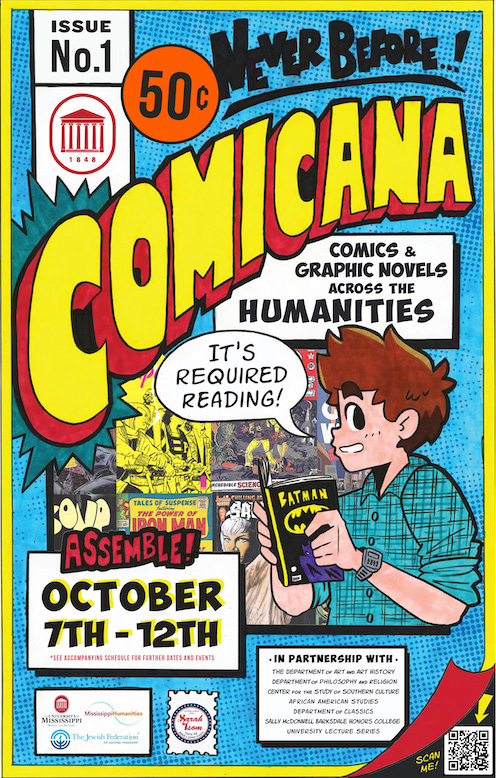 A number of University of Mississippi departments have teamed up for Comicana, which runs through Saturday (Oct. 12) on campus, focusing on the role of comics and graphic novels in offering insight into questions literature often doesn’t answer.

The departments of Art and Art History, Classics, English, Philosophy and Religion, and Writing and Rhetoric worked together to create the weeklong interdisciplinary conference. Comicana features readings of graphic novels and comics across the humanities.

It includes workshops, exhibitions at the J.D. Williams Library and Gallery 130, and guest speakers. The events are free and open to the public, and the majority of events are slated for Bryant Hall.

Despite what people already think about graphic novels and comics, the literature chosen to be discussed at Comicana will analyze more serious topics such as religion, gender roles, sexism and poverty, organizers said.

“The predetermined image of comics and graphic novels have limited people to see what these sequential arts have to offer,” said Mary Thurlkill, professor of religion. “I hope that this convention will bring awareness of these topics and bring more people into the world of sequential arts.”

Kris Belden-Adams, associate professor of art history, worked to organize the conference and helped get students involved. She hopes the event will create a wide-ranging conversation for the community.

“It’s great for us to leave campus and connect with the community, and I don’t think we do that enough,” Belden-Adams said. “I think this event will help us make that much-needed connection with the community.”

Thurlkill was inspired to organize a comic conference on campus, and she brought in Belden-Adams; Lauren Cardenas; assistant professor of printmaking; and Wendy Goldberg, core instructor in the Department of Writing and Rhetoric, to help put it together. Thurlkill also secured funding from the Mississippi Humanities Council.

“I think it’s important to show how comics are important throughout this community,” Belden-Adams said. “They are a way to bring all the departments together, and this conference gives a familiar place for people and gives them a more scholarly look into the comic community.”

All the organizers share the same passion about bringing awareness of the comic world to the Oxford community and want to encourage people to think more critically about controversial topics.

Cardenas hopes those who attend will begin to view comics as more than just entertainment, and that it will bridge some gaps between the humanities and the different discourses within them.

“Comics provide an interesting connection to humanities and when put through the lens of the comics, it helps people think more critically,” Cardenas said. “Looking at these topics from a variety of lenses – like a feminist lens, an LBGTQ lens or through a more contemporary culture lens – will help show how the dynamics of these topics have started to change.”

Cardenas created a student panel, made up of five Ole Miss undergraduate and graduate students, to help with Comicana in hopes of bringing student awareness to the event.

“I hope this event gets traction for the comics discussed and I think if it gets traction, it will gain traction with the student body,” Cardenas said.

For a full schedule and more information about Comicana, go to https://egrove.olemiss.edu/comicana/2019/.