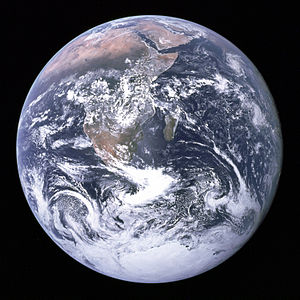 The Blue Marble is a famous photograph of the Earth, taken on December 7, 1972, by the crew of the Apollo 17 spacecraft. | Photo courtesy of WikiCommons

Renowned Columbia University anthropologist Paige West is the featured speaker for Earth Day at the University of Mississippi.

“Dr. West’s work has broad scholarly interest,” said Robbie Etheridge, UM professor of anthropology and co-organizer of the event. “West has written about the linkages between environmental conservation and international development. Since the mid-1990s she has worked with indigenous people in Papua New Guinea to understand their traditions, especially as they relate to biodiversity, and to help them figure out how to conserve their cultures, languages and environments.”

A graduate of Rutgers University, she joined the faculty at Barnard College and Columbia University in 2001, where she is a professor of anthropology.
West has published two books and is the editor of three more. Her work focuses on indigenous adaptation to climate change across the Pacific.

In 2008, West founded the journal Environment and Society: Advances in Research, published by Berghahn Books. She serves as editor for the publication.

Two years ago, West delivered the Leonard Hastings Schoff Memorial Lectures at Columbia University. She is the co-founder of the PNG Institute of Biological Research, a small nongovernmental organization dedicated to building academic opportunities for research in Papua New Guinea, and the Roviana Solwara Skul, a school in the island nation dedicated to teaching at the nexus of indigenous knowledge and Western scientific knowledge.

For more about the UM Department of Sociology and Anthropology, visit https://socanth.olemiss.edu/.