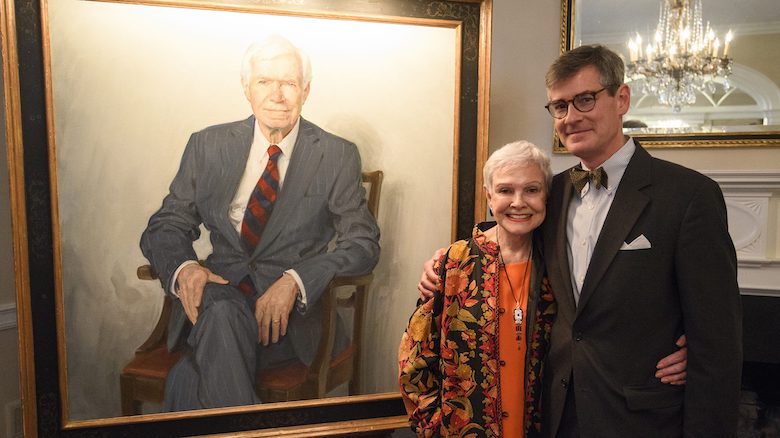 A portrait of former U.S. Senator Thad Cochran, the nation’s 10th-longest serving senator and a University of Mississippi alumnus, was installed Monday (April 8) in the university’s Thad Cochran Research Center.

The portrait commemorates Cochran’s service to Mississippi and his longstanding support for the university and its research enterprise.

“Sen. Cochran has been one of the University of Mississippi’s greatest champions,” Interim Chancellor Larry Sparks said. “His outstanding leadership and advocacy have shaped numerous programs and offerings at our university and all around the state.

“This portrait is a wonderful way to honor his legacy of public service and his dedication to Mississippi and the nation.”

Born in Pontotoc in 1937, Cochran earned his Bachelor of Arts in psychology and Juris Doctor degrees from UM.

“It was a great honor to be asked to preserve the memory of Sen. Cochran’s legacy in visual form for Ole Miss,” Bouldin said. “Whenever I try to paint a portrait, I try to capture not only a tangible, physical likeness, but also an intangible likeness – a feeling, a personality, a persona.

“I want the viewer to look at the portrait and not just say, ‘That looks like Sen. Cochran.’ I hope they’ll say it feels like him.”

Bouldin’s artistic process included speaking with former staffers and Kay Cochran, the senator’s wife, to learn more about Cochran’s personality. The conversations led him to feature the senator seated in an armchair, in a relaxed position, rather than standing, as is typical of official political portraits.

“There’s no United States flag or state flag, no podium or Senate chamber floor,” Bouldin said. “We’ve tried to put him in conversation with the viewer. When I talked with former staffers and others before I started, everyone mentioned him being a good listener, and how he took time for people and to listen to his constituents.

Cochran sponsored the 1988 federal legislation that authorized the university’s National Center for Natural Products Research, the only university-affiliated research center devoted to improving human health and agricultural productivity through the discovery, development and commercialization of pharmaceuticals and agrochemicals derived from natural products.

The program began operations in 1995 and has held decades-long partnerships with the U.S. Department of Agriculture and the Food and Drug Administration. The Thad Cochran Research Center West Wing was dedicated in 2015.

Kay Cochran had multiple conversations with Bouldin as he planned the painting, and she expressed appreciation for the portrait.

“Sen. Cochran is humbled by the presentation of this portrait,” Kay Cochran said. “His family and I are very appreciative to the university for this tribute to Thad in recognition of his service and contributions to Ole Miss. I am especially pleased with this portrait. I consider Jason Bouldin to be among the best portrait artists in this country, and to me, this portrait is his finest work.

“I surely enjoyed working with him during the days and months that he spent with Thad in creating this work of art. And it is very special to me that the home of this flawless image of my husband will be at the Thad Cochran Research Center at the University of Mississippi, an institution he has loved his entire life.”

Before being installed in the Thad Cochran Research Center this week, the portrait was unveiled on March 22. By coincidence, the unveiling occurred one year to the date of Cochran’s final Senate vote. He resigned from office April 1, 2018, citing health concerns.

Cochran was first elected to the Senate in 1978, following six years in the U.S. House of Representatives, representing Mississippi’s fourth district. While in Congress, Cochran served in a number of major leadership roles, including as chair of the Senate Appropriations Committee from 2005 to 2007 and from 2015 to 2018.