Classics Professor Sees the Writing on the Wall 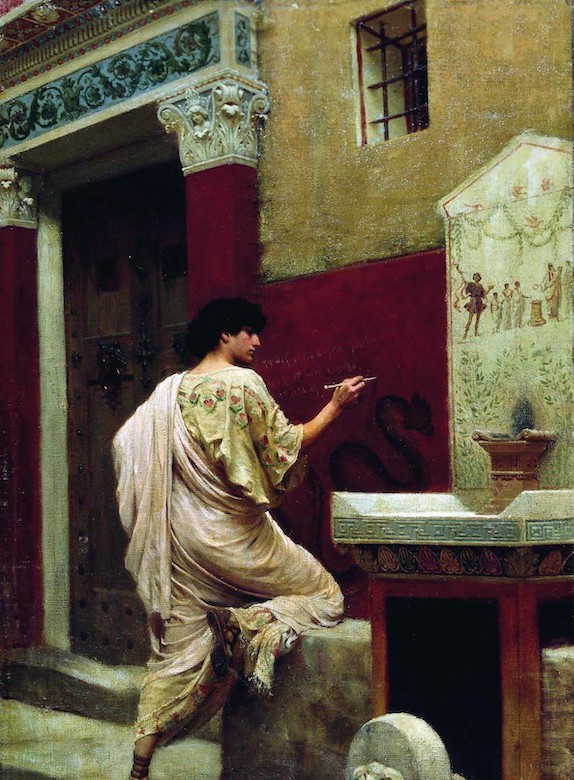 The Walls of Pompeii by Stefan Bakalowicz

They didn’t have spray paint or Sharpies, but ancient Romans graffitied all over their towns thousands of years ago.

They created political posters, announcements of public events, like gladiators’ competitions, and personal greetings. One surviving salutation to a woman reads “Aniciae feliciter,” or “good tidings to Anicia.”

“Without access to paper, people communicated by scratching messages in Latin on walls in their houses and other buildings,” said Jacqueline DiBiasie-Sammons, a University of Mississippi assistant professor of classics. “They also wrote these messages using charcoal.”

DiBiasie-Sammons is also field director of The Ancient Graffiti Project, a digital resource for locating and studying handwritten inscriptions of the early Roman empire. To further her field, she brought together 23 scholars from across the globe to share academic papers about ancient graffiti.

The four-day symposium, “Reading the City: Inscriptions of the Bay of Naples,” investigated the role of inscribed materials in the cities, towns and villas of Campania, a coastal region of southern Italy, in October at the Villa Vergiliana, in Cuma-Bacoli, Italy. UM was among supporters of the conference.

Participants also traveled as a group to see these inscriptions on site, as the villa is adjacent to Pompeii, where inscriptions were preserved for thousands of years beneath the volcanic ash of Mount Vesuvius, which erupted in 79 A.D.

“By organizing and presenting at this outstanding conference, Dr. DiBiasie-Sammons continues to build the national and international reputation of her work,” said Molly Pasco-Pranger, associate professor and chair of the Department of Classics. “It’s an amazing accomplishment for any scholar, but especially for one still in the early years of her career.”

DiBiasie-Sammons and symposium co-organizer Holly M. Sypniewski, professor of Greek and Roman studies at Millsaps College, were especially interested in research about inscriptions that may have been created by the unfree, women and the lower classes.

“My goal for the symposium was to explore how everyday people interacted with the writing on their walls,” DiBiasie-Sammons said. “These inscriptions provide important insight into daily life in Roman society.”

She brings her enthusiasm and findings to the classroom to bring ancient cultures alive for her students.

“Learning about graffiti in our Roman Art and Archaeology class has helped me to understand the Romans in a more holistic way,” said Constance Hartline, a classics and English major. “Most of the monuments we study come from the elites, showing only a part of the culture.

“When we get to see some of the graffiti inscribed by the everyday people, there is a humanizing element that helps connect us to these ancient people, removing some of the distance from a civilization that it sometimes seems only existed in marble monuments.”