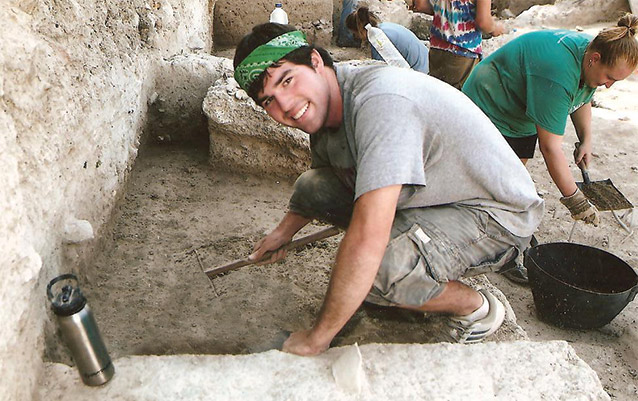 For classics majors, summer is a time to gain experience working in the field. Last year, with assistance from the department, a record number of students studied and excavated abroad.
“The Department of Classics is fortunate to have resources expressly designed to support student study abroad experiences,” said Aileen Ajootian, professor of classics and art. A fund generously endowed by alumni Mike and Mary McDonnell in 2009 has helped numerous classics students participate in study abroad programs, attend archaeological field schools, and travel to conferences in the last three years.
Options include excavations, surveys, and museum studies at the Athens, Greece, research headquarters of the American School of Classical Studies. “The students visit sites all over Greece and get to use the library,” said Ajootian.
Southern Methodist University law student Colby Roberts from Poplarville participated in a Greek archaeological excavation last spring.
“The Agora was the ancient market place in Athens, and the excavations are in the center of the city, which makes it fairly unique,” said Roberts, who graduated in May with a B.A. in classics and economics. “I worked under the supervision of archaeologists and Ph.D. candidates for two months digging in areas that contained material from about 500 B.C. to A.D. 1200.”
This fall Robert Christopher Miller, a native of Gautier, enters the Columbia University classical studies Ph.D. program with experience from three study abroad trips. The UM classics department funded his semester at the Center for Hellenic Studies in Athens in fall 2011 and a month at the Kenchreai Archaeological Field School in June 2012.
“We worked clearing the dirt and brushing off a part of the harbor of the ancient city, washing pottery in preparation for its analysis, and sorting through unclassified objects in the Isthmia Museum from an earlier excavation of the site in the 1960s,” said Miller.
“For serious classics students who want to continue with their studies, attending a summer session abroad is a must,” said Ajootian. Thanks to private endowments the classics department provides the resources to obtain that global scholarship.