Classics Major to Study in Italy 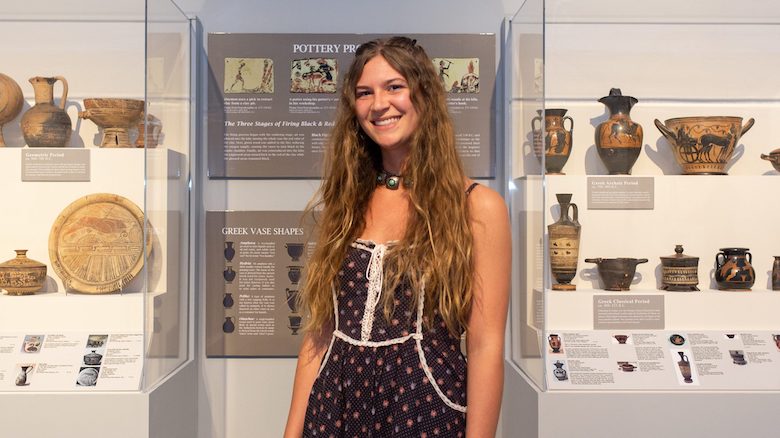 Greta Koshenina, a junior classics major at UM, is preparing to work this summer at the Poggio Civitate Archaeological Project in Vescovado di Murlo, Italy, followed by studies this fall at the Umbra Institute in Perugia. While on campus, she works at the University Museum. Photo by Dason Pettit

A University of Mississippi classics major soon will study in two Italian cities, thanks to several scholarships she has received for archaeological research.

Greta Koshenina is heading to a field season at the Poggio Civitate Archaeological Project in Vescovado di Murlo, Italy, in July, followed by studies this fall at the Umbra Institute in Perugia.

“Their mysteriousness and portrayal of women, specifically their use of amber for magical purposes, particularly caught my eye,” she said. “When I found the Poggio Civitate Archaeological Excavation, I knew it would be the perfect place to delve into the study of Etruscan culture and history.”

Koshenina, who will stay in Vescovado di Murlo through Aug. 1, plans to research ancient Etruscan women. Etruscan women were literate, participated in religious rituals, dined with their husbands and attended symposiums.

Because there is little literary evidence from the Etruscans and from other Greek and Latin sources, Etruscan archaeologists rely upon evidence from tombs and houses.

Etruscan civilization is the modern English name given to a civilization of ancient Italy. Its homeland was in the area of central Italy, just north of Rome, which is today called Tuscany. In ancient times, tradition held that the Etruscans had emigrated from Lydia, on the eastern coast of present-day Turkey.

The excavation, led by classics professor Anthony Tuck, is sponsored by the University of Massachusetts at Amherst.

“We will be excavating an area that is believed to have been the location of a range of industrial activities and habitation of the community’s non-elite members,” Koshenina said.

Her fall semester at the Umbra Institute, where she will enroll in the scholars program, is courtesy of additional funding from the McDonnell Endowment, the Lipsey-Rubright Scholarship and an Honors Fellowship made possible by philanthropist Jim Barksdale.

Two weeks after finishing field school, Koshenina will arrive in Perugia and remain there until Dec. 15. Though she won’t be involved in any archaeological work there, Koshenina anticipates being enrolled in the museum studies course, which is called a mini-internship.

“This will give me the opportunity to have hands-on experience in a European museum and see the similarities and differences between it and American museum practices,” said Koshenina, who works in the UM Museum. “I will also be enrolled in Italian, Latin and an Archaeological Discoveries course.”

Koshenina will use scholarship funds to cover the costs of the two programs. The Sally McDonnell Barksdale Honors College provided travel funds for the summer program, and a contribution from the Department of Classics has covered the bulk of the Poggio Civitate program’s fees. The various other scholarships cover the rest of the fee and food.

“None of my research abroad would be possible without the generosity of the classics department, the Honors College, as well as other honors societies and foundations,” she said. “I’ve been extremely lucky, and the organizations who have supported me see the importance of studying the ancient past.”

One of Koshenina’s goals for the two programs is preliminary research for her honors thesis, which she plans to defend in April 2020.

“The scholars program at the Umbra Institute in Perugia will give me the opportunity to write a research paper on the information I find there, which will serve as the first chapter of my thesis,” said Koshenina, who also hopes to become fluent in Italian.

“I will be staying with a host family, so I think this will be a perfect opportunity to practice speaking Italian every day,” she said. “I will also be enrolled in an upper-level Italian course, which will likely be taught strictly in Italian. This will be a skill I can use for the rest of my life.”

Ultimately, Koshenina is seeking a better sense of the Italian culture she loves so dearly.

“I have visited Italy three times, but never for longer than a month,” she said. “I cannot wait for this complete submersion into the Italian culture.”

Molly Pasco-Pranger, chair and professor of classics at Ole Miss, said Koshenina is most deserving of her achievements and recognitions.

“Greta has excelled in language study, as well as in her courses in classical civilization,” she said. “The field school she is participating in this summer is one of the best available and will take her a long way in her understanding of archaeological methods and the particulars of Etruscan archaeology.

“The chance to carry that experience straight into her full semester program in Perugia, and into her honors thesis work on Etruscan women, is an extraordinary educational opportunity.”

Koshenina said she wants to pursue a career either in museum studies, classical archaeology or both.

“I think these two programs will be the perfect way to decide what sort of graduate school program I will attend,” she said. “The Poggio Civitate Archaeological Excavation will teach all of the aspects of archaeology, even cataloguing and lab work.”

She is also considering pursuing the path of artifact conservation.

“My favorite aspect of classics is that there are so many amazing career opportunities to consider,” Koshenina said. “Thankfully, I still have time to decide. And I will be given intense, hands-on experience in the home of the ancient Etruscans and Romans.”

Greta Koshenina, a junior classics major at UM, is preparing to work this summer at the Poggio Civitate Archaeological Project in Vescovado di Murlo, Italy, followed by studies this fall at the Umbra Institute in Perugia. While on campus, she works at the University Museum. Photo by Dason Pettit