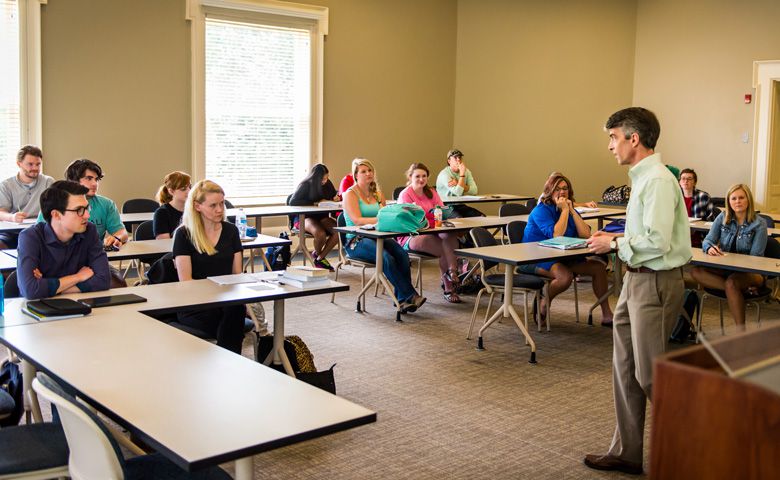 Professor Brad Cook teaches ancient Greek and Latin and courses on the history and culture of ancient Greece. He also publishes on the political world of fourth-century B.C. Athens, on specific ancient Greeks of that century and on the traditions about these figures, historical and legendary, through the last two millennia.

A Memphis, Tennessee, couple recently fulfilled their $500,000 commitment to an endowment that supports the University of Mississippi Department of Classics.

Mike and Mary “Bickie” McDonnell, who consider the classics to be the focal point of a well-rounded liberal arts education, created the endowment in 2009 with an initial gift of $250,000. Classical studies may touch on a wide range of subjects, including religion, art, philosophy, drama, poetry, science, astronomy, mythology, geography, mathematics, archaeology, politics and law.

In the past three academic years alone, 18 students majoring in classics have together received more than $35,000 from the McDonnells’ endowment to support their study of classics abroad. The students have participated in archaeological field schools, digging in Greece, Italy, and England; studied intensive Latin in Ireland; and lived and learned for full semesters abroad in Athens, Rome, and Edinburgh.

“The availability of this support has also given our own faculty the impetus to lead our students abroad themselves so that even more students, whether classics majors or not, can experience ancient Mediterranean culture firsthand,” said Molly Pasco-Pranger, associate professor and chair of classics. “We are very grateful for the opportunities the McDonnells’ gifts have already made possible and we’re excited to continue the growth of the department and its offerings with the support of this new gift.”

Mike McDonnell, a graduate of Yale University, is co-owner of Orgill Inc., which provides wholesale distribution and retail services to the home improvement industry. He and Mary enjoy spending time with their three children and seven grandchildren, all of Memphis.

“We are proud of what Ole Miss is doing and we want to see this growth continue,” Mary McDonnell said, adding that it’s the university’s progress under the leadership of Chancellor Emeritus Robert Khayat that originally inspired their financial support.

“We thought the work he did at Ole Miss ought to be celebrated,” Mike McDonnell said.

Khayat said he is personally humbled by the McDonnells’ recognition of his work and, on behalf of the university, he’s grateful.

“The McDonnells’ decision to create the endowment is inspiring and will help further the university’s commitment to attracting the region’s brightest students who ultimately become the nation’s most promising leaders,” Khayat said. “For many years, Mike and Mary McDonnell have been good friends of the university. Their generous gift supporting classics at Ole Miss is a reflection of their extraordinary awareness of eternal values and their generosity.”

Individuals and organizations may make gifts to the McDonnell scholarship endowments by mailing a check with the designation noted in the memo line to the University of Mississippi Foundation, 406 University Ave., Oxford, Miss. 38655; visiting umfoundation.com/makeagift or contacting Denson Hollis at 662-915-5092 or dhollis@olemiss.edu.