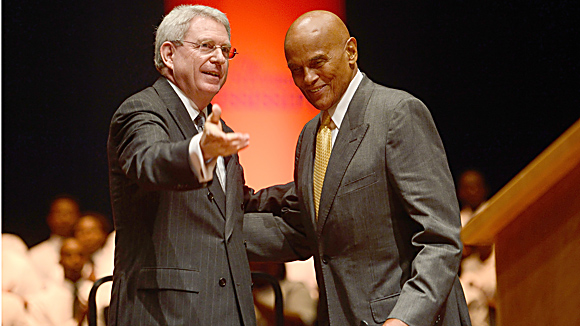 Mixing memories of moments with meditations on the magnitude of the movement, civil rights activist Harry Belafonte challenged a rapt audience observing the 50th anniversary of integration at the University of Mississippi to forge ahead to new human rights victories.

The legendary entertainer, who has been an advocate for civil rights and humanitarian causes, delivered the keynote address Monday (Oct. 1) for the university’s ongoing 50th anniversary commemoration of the enrollment of James Meredith, the first African-American to attend UM. Addressing a capacity crowd at the Gertrude C. Ford Center for the Performing Arts, Belafonte encouraged his audience to not only look back on past triumphs, but to deal with present struggles while planning for future victories.

“Civil rights is a not a movement; it’s a way of life,” Belafonte said. “I’m saddened when I hear people say that the movement is over, for nothing could be further from the truth.” 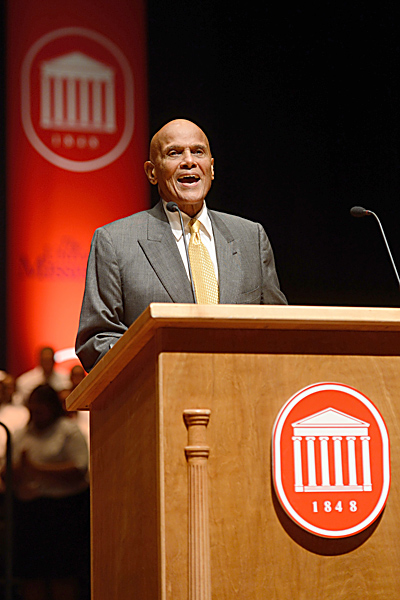 Harry Belafonte delivers the keynote address in Oct. 1 in the University of Mississippi’s commemoration of its 50th anniversary of integration. UM ohoto by Kevin Bain.

With his trademark raspy voice somewhat diminished by age, the 85-year-old mixed levity with seriousness as he reminisced about his associations with Meredith, Martin Luther King Jr., Rosa Parks, Fannie Lou Hamer and Nelson Mandela.

“The course of my life is blessed because I was touched by so many people whose lives were dedicated to such great humanitarian causes,” Belafonte said. “The civil rights struggles of African-Americans speak to the good of our common humanity and influenced the course of history.”

In hushed tones, Belafonte recalled his first visit to Mississippi during the Freedom Summer of 1964. He recruited lifelong friend and fellow actor Sidney Poitier to help him deliver $100,000 raised in support of the Student Non-Violent Coordinating Committee in Greenwood.

“There was nothing attractive about it,” he quipped, raising nervous laughter from the crowd. “The three civil rights volunteers had disappeared in Philadelphia. We were caught in a very critical crossroads of wanting to come and help others with voter registration while fearing for our personal safety.”

Escorted by U.S. marshals stationed along the route from Jackson to the Mississippi Delta, Belafonte, Poitier and a small entourage of locals made the journey. Members of the Ku Klux Klan made their presence known but did not stop them, he said.

“We accomplished our mission,” Belafonte said. “It was a defining moment for all of us.”

In opening remarks, UM Chancellor Dan Jones said as the university continues working toward racial reconciliation, it’s important to express regret and apologize for the injustice that was done.

“We must not treat this lightly,” Jones said. “We should also take this opportunity to recommit ourselves to opening the doors of this university for everyone willing to do the hard work required of students in a leading university, regardless of race or ethnicity or income. The events of 1962 made accessibility a core value of our university forevermore.

“We must also acknowledge that we still live in an imperfect world, and that this university, state and country have not yet arrived at that better place we all envision. Injustice still exists in the world today. And we must continue our efforts to right wrongs and to continue our pilgrimage toward full reconciliation.”

Stating that the human rights movement has always existed whenever tyranny and fear oppress any people group, Belafonte championed the effectiveness of nonviolence as a powerful instrument of liberation.

“Some people saw nonviolence as passivism or a capitulation to the oppressors, but this is not true,” he said. “Look at how effectively it brought about the transfer of power in South Africa following the end of apartheid. Or how a lone student faced down an armored tank in Tiananmen Square. 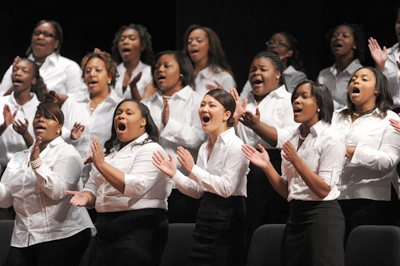 The University of Mississippi Gospel Choir performs before Harry Belafonte’s keynote address as part of the university’s commemoration of its 50th anniversary of integration. UM photo by Kevin Bain.

“The reformation of the former Soviet Union and its ideologies. All these are examples of the higher morality and higher truth of humanity rising above opposition to overthrow tyranny and oppression without the use of force.”

In closing, Belafonte hailed the civil rights movement as a success overall, but not completely. He financed the Freedom Rides, supported voter registration drives, raised thousands of dollars to release King and other civil rights protesters from jail and helped to organize the March on Washington in 1963.

“We lost Martin, but our movement was not for naught as we did accomplish the goals we set out to achieve,” he said. “Our failure was in not realizing the global impact we had and developing a vision beyond what we were striving to attain. The human rights movement lives, breathes and continues to reveal itself everywhere in the world people are yet striving for freedom.”

Belafonte received lengthy, thunderous standing ovations both before and after his address.

Meredith was not in attendance Monday night, but members of his family were, along with former Gov. William Winter and other dignitaries. Special music was performed by the UM Gospel Choir

He was the first African-American to win a Tony Award and an Emmy Award. He received the Kennedy Center Honors in 1989, was awarded the National Medal of Arts in 1994 and won a Grammy Lifetime Achievement Award in 2000. Belafonte was the driving force behind the 1985 “We Are the World” project to help people affected by war, drought and famine in Africa. In a 2007 interview, Belafonte said that he has retired from performing.