What does it mean to major in classics?

The study of classics includes every aspect of the ancient Mediterranean world, with exploration of ancient languages, literatures, history, art, and archaeology.

Classics majors gain a complex view of the ancient Mediterranean world and explore their own world as they do so. They address questions of human and historical significance through the works of the Greeks and Romans; understand the modern cultural world by recognizing its roots in the past; know their own language better by learning Greek or Latin; explore the world through study abroad; and strengthen their ability to read, communicate, observe, and think analytically.

There is a choice of three emphasis areas: Latin, Greek, or classical civilization.  The department boasts a vibrant and close-knit community with lots of events throughout the year to keep you involved in classics beyond the classroom.  There are opportunities to study in the Mediterranean through archaeological digs, study tours, or whole semesters abroad.

Why is UM a good place to study classics?

The classics faculty have areas of specialization in Greek and Roman history and literature, art and architectural sculpture, archaeology, and digital humanities.

UM provides several major ways that students can engage directly with the Mediterranean region and its artifacts, to move learning outside of the traditional classroom and digital images. The department provides financial support for study abroad – archaeological digs, study tours, and whole semesters abroad are among the possibilities. There are faculty-led programs during 2 week semesters and summer terms, such as Ancient Graffiti Project in Herculaneum. 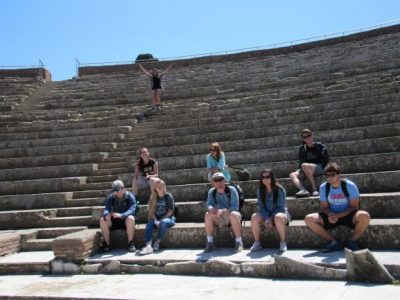 There are also UM-affiliated programs in Greece and Italy, with an advantage to our students in terms of admissions and financial aid because of departmental membership. The Intercollegiate Center for Classical Studies in Rome is an excellent, intense, classics-centered semester program.  The American School for Classical Studies at Athens provides an introduction to Greece from antiquity through the modern period, and there is a competitive Eta Sigma Phi Scholarship to this program.  Finally, Sunoikisis is a consortium that offers a field school at Kenchreai, the port of Corinth in Southern Greece. 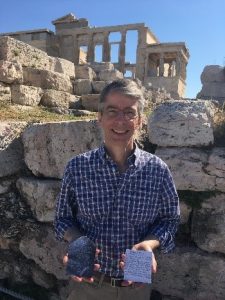 Dr. Brad Cook, Associate Professor of Classics, earned his Ph.D. from the University of Washington, and teaches ancient Greek and Latin and Greek history and culture. His research focuses on the texts and traditions relating to the Athenian politician Demosthenes and to Philip II and Alexander of Macedon.

With funding from a National Endowment for the Humanities fellowship, Dr. Cook recently spent a semester at the American School of Classical Studies in Athens, Greece, researching two ancient Greek inscriptions that are part of the Robinson Collection at the UM Museum. The gold inscription recording the treaty made in 202 B.C. between the king of Macedon and a city on the Dardanelles that controlled access in and out of the Black Sea. The bronze inscription records the freeing of a slave woman named Philista in northwestern Greece around the same time.

Why study classics at UM? “For anyone interested in ancient Greece and Rome, these two inscriptions are great examples of what is so amazing about Classics. You get to study the intricacies of the ancient Greek language, the ins and outs of ancient social structures and political life, and the creation and use of ancient artifacts. Each of these subjects is fascinating individually but with this sort of project you get to work on each facet while also reassembling the bigger picture and the stories that these texts and artifacts have to tell. And with these two inscriptions, the stories could not be more fascinating and also different: the gold one made for a king, the bronze for a freed slave, the gold one as a reminder to the king of his oath to help the other city if attacked (it was; he was busy elsewhere), the bronze as a personal, and portable, proof of freedom.”

What can UM classics majors do after graduation?

Our classics alumni are working in many different sectors of the economy, with the largest six groups shown in this infographic. The largest percentages are working in law, business and financial firms, and higher education. 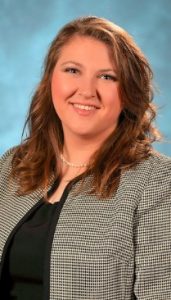 “I took my first Latin course in the 8th grade, and didn’t stop until my junior year of college. My broader interest in classical cultures stemmed entirely from my taking Latin all of those years.”

Libby was a member of the Mock Trial team, president of the University Lions Club, and an officer of Eta Sigma Phi Classics Honor Society. She was inducted into Lambda Sigma, Mortar Board, Phi Beta Kappa, and Phi Beta Phi honors societies. She enrolled in the honors class, Ethics in Archaeology, where she studied financial, legal, and political considerations in the collection and preservation of ancient artifacts. Libby was a founding member of the Archaeological Ethics Bowl team and an intern with the Robinson Collection of Greek and Roman Antiquities at the UM Museum. She wrote a Southern Gothic novella for her honors thesis.

After graduation Libby worked as an AmeriCorp volunteer in Washington, D.C. She is in a graduate program in Museum Studies at the University of San Francisco, with an ultimate career goal of a curatorial position at a historic house or museum where she could use the space to address contemporary social justice issues.

Why study classics at UM? “The professors! My relationships with the faculty changed the course of my life. While a student, I enjoyed the close nature of the department. They knew me on a first name basis, and I appreciated the fondness and accountability that closeness brought with it. My courses were challenging but rewarding, and the professors knew how to push me in encouraging ways. The department helped us found an Archaeological Ethics Debate Team and to travel to competitions, which was the deciding factor for my career choice of Museum Studies.”