Respected professor of chemistry to lead research and graduate education 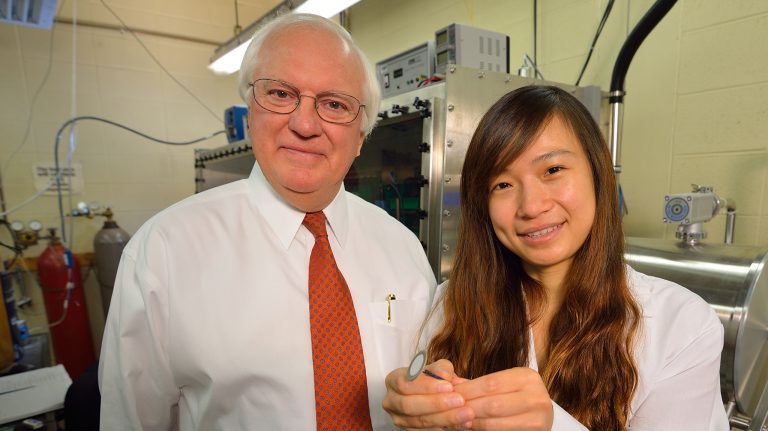 Charles L. (Chuck) Hussey, chair and professor of chemistry, is the new associate dean for research and graduate education in the College of Liberal Arts. Here he shares a moment with research associate Li-Hsien Chou. Photo by Robert Jordan/Communications

Every time Charles “Chuck” L. Hussey thinks he’s achieved the last height in his storied career, the University of Mississippi professor takes another step up the ladder.

The multiple award-winning chair and professor of chemistry and biochemistry, who received the 2015 UM Distinguished Research and Creative Achievement Award, is the new associate dean for research and graduate education in the university’s College of Liberal Arts.

“I am very excited about the chance to serve in this role and anxious to get started,” said Hussey, who also received both the Electrochemical Society’s Max Bredig Award in Molten Salt and Ionic Liquid Chemistry and the Southeastern Conference’s Faculty Achievement Award in the 2014-15 academic year.

“The appointment of Dean (Lee) Cohen gives us new direction, because he is very interested in improving research/scholarship and graduate education in the college. I want to be a part of helping him move the college forward in these areas.”

Cohen said Hussey brings much to the position.

“I am delighted that Dr. Hussey has agreed to assume this very important new role in the College of Liberal Arts,” Cohen said. “I believe Chuck is ideal for this position given that he has significant administrative experience serving as the chairperson of a large and complicated department, has an exemplary research record, and he has a great deal of knowledge, involvement and success working with graduate students.”

Hussey said his short-term goals are to study the various departments and disciplines in the college to learn about the roadblocks they face when trying to engage in research, scholarship and graduate education, as well as the opportunities they have.

“Once I have a sense of the issues, then we will work together with departments to develop long-range strategies that make use of our available resources to attack these roadblocks,” he said. “I also see potential for the growth of new graduate programs in the college.”

Hussey’s new duties will end his longstanding tenure as chair of chemistry and biochemistry, a position he said he has thoroughly enjoyed. Still, he doesn’t plan to completely leave his discipline.

“As the associate dean for research and graduate education, I think it is imperative that I continue to pursue my own research as much as practicable,” Hussey said. “I find research to be engaging, relaxing and enjoyable. Besides, this is what we should be doing as faculty at an R-1 university.”

Hussey, who holds a doctorate in chemistry from UM, joined the faculty in 1978 after serving a four-year active duty term as a military scientist at the U.S. Air Force Academy’s Frank J. Seiler Research Lab. For more than 35 years, he has researched the electrochemistry and transport properties of ionic liquids and molten salts, an outgrowth of the work he began at the Seiler Lab.

He has authored or co-authored more than 150 refereed journal articles, book chapters, patents and government technical reports. His work has been supported by the National Science Foundation, Air Force Office of Scientific Research, Alcoa, U.S. Department of Energy and U.S. Department of Defense.

He also served as the technical editor of the Journal of the Electrochemical Society, the world’s top electrochemistry journal, since 2000.