Col. Kelvin Nichols marks promotion where he was first commissioned 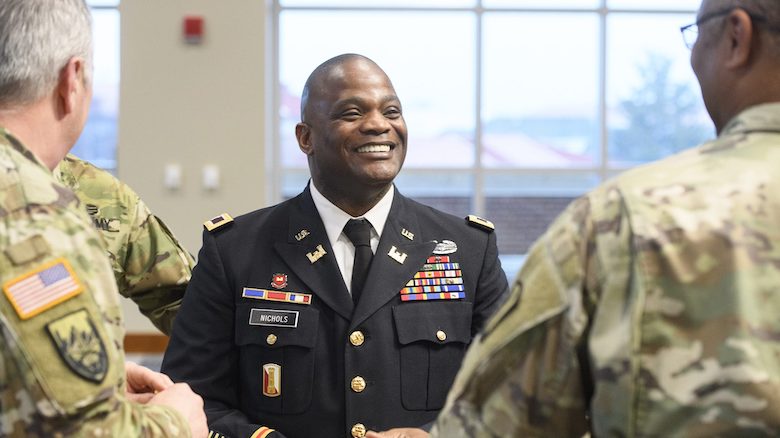 Col. Kelvin Nichols greets fellow Mississippi Army National Guardsmen after a ceremony to promote him to colonel. Nichols has been employed by the University of Mississippi for 25 years. Photo by Thomas Graning/Ole Miss Digital Imaging Services

Col. Kelvin Nichols has accrued more than 29 years of military service in the Mississippi Army National Guard and seen action around the world, and he asked friends, family and his brothers and sisters in arms to join him back home recently at the University of Mississippi, where his military career started.

Nichols enrolled at Ole Miss in 1990 while he was already an enlisted guardsman. In 1993, he was commissioned a second lieutenant officer upon his completion of the university’s ROTC program. He celebrated his promotion to colonel Feb. 19 on the campus where his journey first started.

“Rarely, if ever, does a commissioned officer have the chance to come back where it all began and receive this honor,” Nichols said after his pinning ceremony and accepting the oath of office in the Ole Miss Student Union ballroom. “To me, Ole Miss seemed to set the conditions to make this possible.

“This is where I entered the ROTC program and where I was first commissioned as an officer on the steps of Guyton Hall. I couldn’t have thought of anywhere more perfect.”

He serves as 168th Engineer Brigade Commander in Vicksburg, and his civilian career spans 25 years with Ole Miss, currently as a financial aid adviser with the Office of Financial Aid.

Nichols sat alongside Maj. Gen. Janson D. Boyles, adjutant general of the Mississippi Army National Guard, and Interim Chancellor Larry Sparks as his military accomplishments and ties to the university were celebrated.

“We were so pleased when Kelvin asked to hold this ceremony on campus,” Sparks said. “It allows us to celebrate him and his service to our nation, but it also highlights his longtime connection to our university, bringing together his family, his Ole Miss family and his military family.”

Nichols credits the university’s ROTC program for laying the foundation of his military career that includes tours of duty in Afghanistan and Iraq, high-ranking support roles in various capacities and multiple commendations, including three Bronze Star Medals.

“(Ole Miss) ROTC is a great training program,” Nichols said. “The leadership style they have here, by truly getting you to be part of the training and planning, is when I really understood the importance of organization and commitment to service.

“All those things sound like buzzwords, but they mean a lot, because if you can plan, organize and communicate, you can do just about anything else, and that’s what this campus was able to provide.”

Among guests were Nichols’ twin brother, Kerry, and sister Karen Griffin, who sat facing photos of remembrance of their grandfather, Clifton Windham, and mother, Dessie Nichols.

“My mom and my grandfather were the two people who pinned me when I was commissioned at Ole Miss,” Nichols said, looking at the photos of his late relatives. “I couldn’t help but bring them here today. They had to be a part of this.”

Boyles touted Nichols’ commitment to service of state and country while highlighting his leadership roles during nearly three decades of service to the Mississippi Army National Guard, and said on multiple occasions, Nichols proved himself worthy of promotions.

During the celebration of his successes, Nichols made sure to remind the audience of his motto, which he adopted from the Army, that emphasizes that individual achievement always stems from a team focus.

“Mission first, people always, team of teams,” Nichols said. “This day is about a team of us working together every day to keep America safe.”

Nichols carries the motto into his civilian job as well, and he thanked coworkers in the Office of Financial Aid for working with him to help ensure every student at the university is given an opportunity for education.

“Teamwork and people are what’s important,” Nichols said. “If anyone ever thinks you got where you are by yourself, you’ve been led blindfolded and you still have those blinders on.

“You didn’t do anything on your own. You’ve always had people pushing you and developing you.”

Nichols recognized U.S. Rep. Trent Kelly, who Nichols served with for many years, Chancellor Emeritus Robert Khayat, Boyles and other commanding officers with the Mississippi National Guard, and his own family and friends as people who have assisted him on his journey.

Nichols earned his Bachelor of Arts in public administration and his master’s degree in higher education from Ole Miss. He earned an associate degree from East Central Community College in Decatur after graduating from Beulah Hubbard High School in the Newton County community of Little Rock.