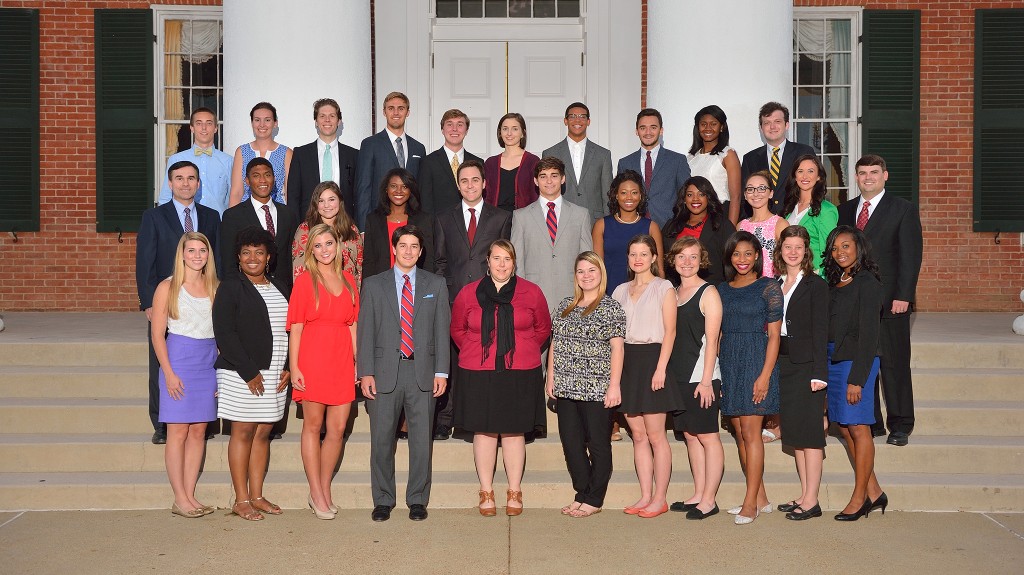 The McLean Institute’s Catalyzing Entrepreneurship and Economic Development cohorts 1 and 2 on the steps of the Lyceum with Albert Nylander, director, and J.R. Love, CEED project manager. | Photo by Robert Jordan/Communications

The 2014-2016 cohort of the Catalyzing Entrepreneurship and Economic Development initiative provided 14 University of Mississippi students opportunities to engage in community service projects in Tallahatchie, Calhoun, Coahoma and Lee counties over the past year.

During the 2014-2015 academic year, the students immersed themselves in the mission of the university’s McLean Institute for Public Service and Community Engagement, which is to fight poverty through education by transformative service, said J.R. Love, project manager of the CEED initiative.

Social problems such as education, health care, asset building and poverty are all components of the CEED program. The students addressed these issues either by creating a business plan, drafting the framework of a nonprofit organization or authoring an academic/policy paper, he said.

“We recognize the significant challenges that our state faces in the areas addressed by the CEED program, but we also acknowledge that these challenges can be met with tangible solutions,” Love said.

Specific locations of the transformational service by the students included: the CREATE Foundation and North Mississippi Medical Center in Tupelo; the Tallahatchie Wellness Center in Charleston; the TriCounty Workforce Alliance and the Shack Up Inn in Clarksdale; the smART program in Vardaman; Insight Park in Oxford; the Mississippi Development Authority in Jackson; and the Tutwiler Community Center in Tutwiler.

For students such as Caitlin Brooking, who worked with the TriCounty Workforce Alliance, these service projects have allowed them to expand their knowledge with real-world experiences and get to know people they probably never would have met had they stayed within the confines of campus.

“I’ve had the opportunity to meet Josephine Rhymes and Dennis Dupree Jr., two very well-respected staff members of the TriCounty Workforce Alliance who are already making a big impact on Coahoma, Quitman, Tallahatchie, Bolivar and Sunflower counties, and learn from them the priorities of the community and how to best get things done,” Brooking said.

“I’ve also been able to lend my own experience in developing programs that fight poverty in Mississippi, and knowledge from my master’s work in sociology to help them expand their reach and implement new programming in the community. The CEED program is a unique opportunity to learn by doing in an academically supportive environment, and it provides the necessary support system to engage directly with communities and organizations, conduct research and pilot strategies to affect change.”

In spring 2016, each student will share his or her solutions as a part of their two-year commitment to the CEED program.

“The McLean Institute is uniquely positioned to address the structural inequities that are a part of many rural communities,” Love said. “Since the founding of the McLean Institute over 30 years ago, the notion of local people addressing local problems has been a hallmark of our institute. These UM students are a key component in working with local people to help address the needs in rural communities in Mississippi.”

The 2015-2017 cohort has started and includes four Innovation Fellows: Will Bedwell of Hattiesburg, Rebecca Bramlett of Memphis, Tennessee, Taeisha Gambrel of Belden and Zack Grossebacher of Madison.

A $1.6 million donation from the Robert M. Hearin Foundation in 2014 provides the financial support for the CEED initiative.

For more information on the McLean Institute or the CEED program, contact Love at 662-915-8832 or jrlove@olemiss.edu.