Carlyle Wolfe: An Infatuation with Nature

by Virginia England, courtesy of The Daily Mississippian
March 4, 2014

At dawn Carlyle Wolfe sits on her front porch, quietly listening, watching and waiting. The sun rises, gradually illuminating the new day, bringing forth a vibrant palette of hues that Wolfe paints in her sketchbook.

This is how Wolfe, artist and adjunct assistant professor of art at The University of Mississippi, began the process for the oil and watercolor paintings that are a part of her newest body of work, “Until the Day Breathes.” The paintings feature intricate layers of delicate flowers and plants, all done from Wolfe’s observations at daybreak.

“In the morning it’s just so thrilling after not seeing any color or light to slowly seeing more and more color,” Wolfe said. “It’s much more dramatic than the evening when the colors just softly fade away. I’ve never been much of a morning person, but I really got into waking up early and having that quiet time.”

Over a cup of Earl Grey tea in the kitchen of her home a few miles outside of Oxford on Highway 30, 36-year-old Wolfe tells of her lifelong fascination with nature. 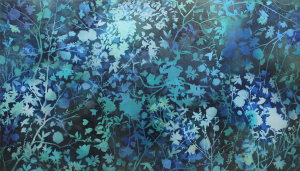 “My father is a pilot and he loves looking at the earth from that perspective. He just really loves beauty,” Wolfe said. “His father worked on the water a lot and had that same experience of appreciating the natural world. I know some of that was passed on to me. I know something develops over generations.”

Wolfe recalls a particular day from her childhood when she gathered leaves and flowers from her neighbors’ yards.

“I was around 4 years old and had all these clusters of leaves and flowers all laid out on the carport and my mom got so angry, telling me I can’t do that,” Wolfe said.

Not much has changed since then. Wolfe gathers flowers, twigs and plants from not just her garden but other people’s gardens to sketch in her studio. Much of her work is done months before she even begins painting.

Wolfe makes records of colors in her sketchbook and completes drawings of plants that she will eventually use to make stencils, cutting shapes out of thick museum board and printmaking paper, sometimes weeks before she actually starts painting on her large wooden panels.

“I’m really interested in the changing of the seasons and cycles of the day so it lets me move faster than if I were to work start to finish on a painting that would take me a month or two months. Then the season would be over,” Wolfe said. “This lets me document it over time, then I am able to finish it over time. For example, with one of the morning observations I might collect 20 colors in an hour then I might work on the painting for the next two months.”

Wolfe’s studio beside her home, typically filled with her colorful paintings, is currently bare. Her newest paintings are on display at three different galleries in Memphis, as well as in Hattiesburg and Laurel, in South Mississippi.

“I had three shows in three months,” Wolfe said. “It was an intense time because I had to make separate work for all of the shows and a lot of new work. I was in a very intense working rhythm, but I never got tired of painting because I really love what I do.”

“We had a visiting artist at LSU who gave me some good advice. He said the bottom line is you need a space to work and time to work,” Wolfe said. “So I found a studio space and got my teaching job then moved back to Oxford because it felt like moving back home. I wanted to work with students in Mississippi and invest in my own community. My work has so much to do with the land and with plants and place, so that made a lot of sense to me.”

Wolfe is not solely a painter. She has a wide range of skills that include photography, printmaking and graphic design, which has allowed her the flexibility to teach 15 different classes over the past 10 years at UM. She is currently teaching a beginning painting and photo imaging class.

“She taught about the process of making art and to ask why we do things we do when making art,” Adams said. “It was hard because in that class we had to learn a lot of technical knowledge about the software, but even though there were limitations when working on the computer, we were still making art.”

Wolfe said she enjoys passing on her knowledge and skills to students.

“It takes a lot of creative people longer to find their fit, but a lot of times they find themselves in really rewarding situations,” Wolfe said. “It is wonderful to teach out of an active studio practice, and whatever I am doing in my studio I can share with my students, even if it is indirectly. It’s wonderful to get to pass along something you love that much.”

Wolfe’s work is currently featured at the Lauren Rogers Museum of Art in Laurel, The University of Southern Mississippi’s campus gallery and the David Lusk Gallery in Memphis.