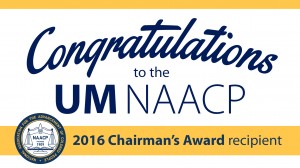 Joining a luminous cadre of past recipients, the University of Mississippi chapter of the National Association for the Advancement of Colored People has been awarded the national organization’s 2016 Chairman’s Award.

The 47th NAACP Image Awards will be presented Feb. 5 from the Pasadena Civic Auditorium. Representatives from the UM chapter will receive the accolade during the live two-hour broadcast on TV One. The ceremony airs at 6 p.m.

“In honoring the University of Mississippi NAACP, we will focus on your organization’s work and accomplishments as organizers, justice activists, advocates, clergy, athletes and artists who have joined forces to contribute to awakening our moral and community conscience on issues negatively impacting society,” said Roslyn M. Brock, chairman of the NAACP national board of directors. “I am inspired by your organization’s activism on a number of issues, and particularly that your organization has not forgotten that ‘courage will not skip this generation.’

“Your presence will be an inspiration that will strengthen us for the many battles ahead and will remind us that, collectively and as individuals, we can make a difference.”

Leaders of the campus chapter were elated by news of the recognition.

“The Chairman’s Award is a tremendous honor for our students, our university’s NAACP chapter and the entire campus community,” said James Thomas, assistant professor of sociology and anthropology and faculty adviser for the chapter. “Recognition for our chapter’s efforts to make our campus a more racially equitable space for people of color is both humbling and inspiring. We know our work is far from done, and our chapter will use this honor as motivation to continue our efforts.”

“I’m appreciative to Mrs. Brock for awarding our chapter in regards to our efforts on campus to create an inclusive and diverse academic space for all,” said Chukwuebuka “Buka” Okoye, a junior public policy major from Clinton who serves as president of the student organization. “I am delighted that she has brought what we accomplished at our campus to the national stage.”

Okoye, who has been an active member since 2014, said he considers the removal of the confederate flag to have been the most fulfilling achievement while he has been president.

“I am most proud of the student resolution to remove the flag from campus because it demonstrates the ability students have to bring meaningful change to their campus community,” he said.

UM administrators commended the group’s efforts and successes, which led to the Chairman’s Award.

“As we recently reflected upon the MLK Day of Service, an educational institution can transition the lives of its students, teach them how to agree and how to disagree with other individuals, the proper way to protest to get their messages heard, how to be a part of the larger community while serving the local community and how to be persistent, dedicated leaders.”

“I am so happy for our students, their chapter leadership and for the recognition they are receiving from the NAACP,” Provost Morris Stocks said. “I am also very proud of the manner in which our students engaged in important civil discourse related to relevant and difficult social issues.”

Established in 1967 at the height of the civil rights movement, the NAACP Image Awards is the nation’s premier multicultural event celebrating the outstanding achievements and performances of people of color in the arts, as well as those individuals or groups who promote social justice through their creative endeavors.

As the oldest and largest civil rights organization, the association had led the fight for equality and a truly integrated society for all Americans. With more than 500,000 members, the NAACP works to eliminate discrimination, poverty and racial injustice throughout the nation and world.