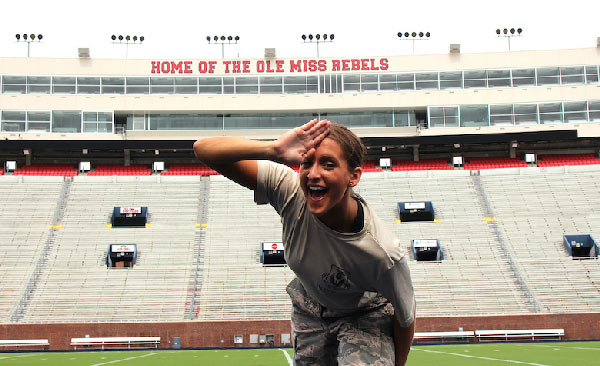 Megan Steis, a University of Mississippi senior majoring in Chinese, celebrates being named a 2020 Navy Federal Credit Union Air Force ROTC All-American by showing off a landshark sign at Vaught-Hemingway Stadium on the Ole Miss campus. Photo by Avary Hewlett

Steis, a University of Mississippi senior majoring in Chinese, was among a select group of students nationwide to receive the award, which is given out each year to ROTC seniors who exhibit leadership, military excellence, scholarship and service. Cadets are selected from ROTC units from each military branch at all Power Five conference universities.

The St. Louis resident, who is minoring in intelligence and security studies, said networking with the other award nominees made her feel blessed, if not a little undeserving.

“It’s such an honor to be known as one of those people who has done great things for ROTC and for my community,” she said.

As a part of the award, winners from each service branch get a $6,500 scholarship, nationally televised recognition and a $5,000 donation to the student’s ROTC booster club, alumni fund or student fund.

The award was presented during her year-end-review, a Zoom call with her commanding officers. As their conversation progressed, her family members and members of the Navy Federal Credit Union team joined the call.

When it was finally time to surprise her with the award, New York Giants tight end and Ole Miss alumnus Evan Engram joined the call to share a word of congratulations. “Looking at your awards and accolades, and the fact that you’ve never gotten a B, is really impressive,” he said.

Steis smiled ear-to-ear as Engram told her about his grandfather who was a member of the Army Airborne.

She was nominated by USAF Lt. Col. Christopher Maroney and Capt. Ken Angel for her sustained excellence during her years in ROTC and her embodiment of the Air Force core values.

When Maroney began planning for a semester under COVID-19 protocols at Ole Miss, he knew he needed to be intentional in his cadet wing commander selection.

“She was the clear choice, knowing the ambiguity and uncertainty we were expecting to face in this challenging time and environment,” Maroney said. “She exceeded our expectations.”

Angel said Steis stood out from the very beginning, ranking No. 11 out of the 476 total cadets, being recognized as a Distinguished Graduate and receiving the peer-selected Warrior Spirit Award during field training – an Air Force ROTC equivalent of basic training – at Maxwell Air Force Base.

Steis was able to help her unit purchase a flight simulator and, as cadet wing commander, reorganized and prioritized some of the ROTC detachment’s funding.

“We wound up being one of the first ROTC units in the country to get a flight simulator,” Steis said. “You can see what it’s like to be in a T-6 cockpit. It’s awesome seeing how much everyone uses it, and it’s a great recruitment tool.”

Steis said she hopes to use the award money and recognition to start an alumni outreach program to bring notable ROTC alumni back to campus to mentor students.

After graduation, she hopes to enroll in pilot training and eventually put her Chinese language skills to use as an analyst for the Air Force, but until then, she plans to log as many flight hours as she can.