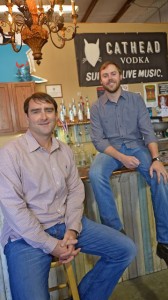 Cathead Distillery owners Austin Evans, left, and Richard Patrick have committed support to undergird the efforts of the Southern Foodways Alliance at the University of Mississippi.

Cathead Distillery has committed long-term support to the Southern Foodways Alliance at the University of Mississippi, as the company recognizes food as a powerful cultural product of the American South.

Based in Jackson, Cathead Distillery is a longtime supporter of music as an important aspect of cultural identity and plans to provide similar funding to the SFA.

Evans and Patrick founded Cathead Distillery in 2010, as Mississippi’s first legal still since the state repealed Prohibition in 1966. They share a love of Mississippi’s music, folk art, literature and food, and, along with distiller Phillip Ladner, produce a number of vodkas, including several seasonal flavors.

“We’ve known about and worked with the SFA folks for a long time,” Patrick said. “We value their mission to tell stories through food and drink. We see meaning in what the SFA does and the impact they’re making, so supporting them in a larger way was a no-brainer.”

An institute of the university’s Center for the Study of Southern Culture, the SFA recently joined with the College of Liberal Arts to endow a professorship in the growing academic study of foodways on the Oxford campus. The study of foodways provides another important facet for UM students to explore in understanding the world around them. In addition, this scholarly study offers a different avenue for students to gain a heightened sense of various cultures.

Together, Cathead Distillery and the SFA will continue to draw chefs, writers, eaters and drinkers from across the country to the state of Mississippi.