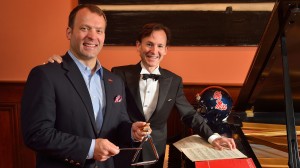 When acclaimed concert pianist and recording artist Bruce Levingston returns to the University of Mississippi Gertrude C. Ford Center for the Performing Arts next Friday (March 27), he’ll be joined by an all-star line-up of campus celebrities.

“This concert is really a concert about friendships, collaboration and inspiration,” Levingston said. “There is also a cool twist in that each piece is a little noir, about the night, so there will be pieces ranging from the haunting Dracula Suite of Philip Glass to nocturnes of Chopin.”

“One of the pieces we will be performing will be the hilarious ‘Sports and Divertissements’ by Erik Satie,” Levingston said. “We think we have the perfect cast!”

Tickets range from $20 to $33 and can be purchased at the Central Ticket Office in the UM Student Union from 10 a.m. to 4 p.m. weekdays.

While the event combines the music of Chopin, Satie, Debussy and Liszt with the words of great writers such as Verlaine, Hugo, Mann, Byron, Fennelly and Franklin, Levingston said the program is mostly about collaboration.
“As I’ve come to know each performer, I’ve learned so much from them,” he said. “Robert Nkemdiche is a tremendous reader and thinker and an incredibly sensitive and thoughtful human being. Ross Bjork is also just one of the greatest leaders here on campus and one of the nicest guys I’ve ever met.”

He voiced similar words of praise for the other cast members.

“Coach Freeze cares not only about his players, but about the impact he has on the lives of so many people outside his field,” Levingtson said. “Beth, Tom and Curtis are world-class writers and we are so blessed to have them at the university. The incredible musicians Robert, Nancy, Jos and Jaci are some of the finest I’ve ever performed with anywhere. Patty and Genevieve simply epitomize elegance.”

Balach said she is looking forward to the evening’s performance.

“It is an absolute joy to work with someone who cares so passionately about music and creating a concert experience that is interesting and genuine,” she said. “We will be performing two gorgeous art songs with beautifully sincere texts: ‘Si mes vers avaient des ailes (If my verses had wings)’ by Venezuelan-born and naturalized French composer Reynaldo Hahn and ‘Goodbye, Goodbye World’ by American composer Lee Hoiby.”
Skoog, a graduate student in voice performance who studies with Balach, will join her and Levingtston for a third selection by Gioacchino Rossini.

Meeting and working with the students has been equally, if not more, transformative for Levingston.

“Fast-rising stars like Jon Luke Watts, who was just accepted for a year of study at Oxford University in England, Ty Laporte and Forest Gamble, both amazing leaders in their sports and brilliant, caring and powerful individuals, have changed my life,” he said. “Their spirits and passion for what they do inspire me in my own work and life.”

“Meeting and watching Bruce play brought back why I love my sport,” Laporte said. “It’s an amazing thing to watch someone do something they love and see their love and passion for it. The way he plays is how I want people to see me when I play, to see my passion.”

The pianist thinks the evening will be one of most unique and entertaining evenings of classical music ever presented at the Ford Center.

“People can really inspire one another regardless of coming from different worlds and disciplines and places,” Levingston said. “I believe when the audience sees our performance, they will all share in this inspiration of friendship.”