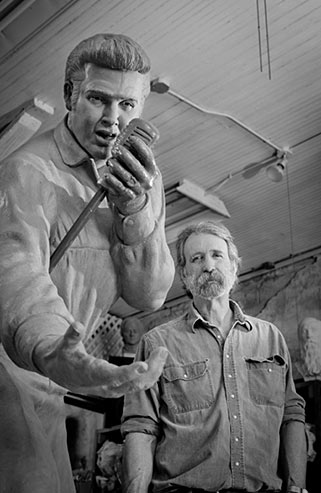 The terracotta statue is but a ghost now as Elvis has left the building.

It was mid-week when Beckwith was in his studio next door to Taylor Grocery helping visitors from Como tour his studio. The self-effacing artist who quietly remains humble about his own accomplishments is coming to terms with the fact that as his work of Southern icons continues, so does his own fame, even if he would prefer to just remain the man behind the art he creates.

While the mold of Elvis made of clay remained in his studio that day, Beckwith shared that the finished mold had been moved to a foundry in Atlanta where it went through a series of processes to become a bronze statue.

The life-size image of the singer born in Tupelo was placed in the Tupelo Fairpark District in August 2012, after Beckwith put the final touches on it.

The statue is on a four-foot tall, eight-sided base (eight was Elvis’ favorite number) and Elvis’ outstretched hand points toward his birthplace.

On Sept. 26, 1956, a 21-year-old Presley returned to Tupelo only a few years after leaving it to perform at the same fair he had performed at as a 10-year-old. This time, as part of the Mississippi-Alabama Fair and Dairy Show, Elvis performed two shows. A hundred National Guardsmen controlled the crowd that came out to see the biggest star to come from their hometown.

Each side of the base has information about Elvis, the concert in Tupelo in 1956, and the photographer who captured the images from the show, Roger Marshutz. The statue is based on an iconic image of Elvis singing Hound Dog, as women raise their hands up to him with dreams they may brush his hand.

Marshutz began his photography career in the mid-1950s, according to mptvimages.com. He took pictures of many famous actors including Rock Hudson and Audrey Hepburn, but is most known for his work with Elvis and Marilyn Monroe.

The Elvis statue is one in what has become a series of works of iconic Mississippians that Beckwith has created.

Visitors to Oxford regularly have their pictures taken with another of his works, the statue of William Faulkner sitting on a bench outside Oxford City Hall. Faulkner gazes across the Square, forever immortalized in bronze. While it’s become a favorite of tourists, the work was not without its critics, primarily over the uprooting of a tree to make space for the statue. But Beckwith, in his usual manner, made it through the fuss to create a piece that has become synonymous with the Square.

Beckwith has also sculpted life-size images of L.Q.C. Lamar and B.B. King, projects that took about one to two years. For large works of art such as these, it usually takes about 12 to 14 months from initial design to setting the base and completing the sculpture installation.

Beckwith completed the Elvis statue in about eight months. “There is no room for error,” Beckwith said about the Elvis piece.

The tight deadline was due to the annual “Dead Week” in August when fans visit Memphis and Tupelo to mourn their beloved musician Elvis Aaron Presley, who died Aug. 16, 1977.

The challenge for every piece is taking a limited amount of information, in this case, a 2D image from a photograph, and creating a 3D object from it. 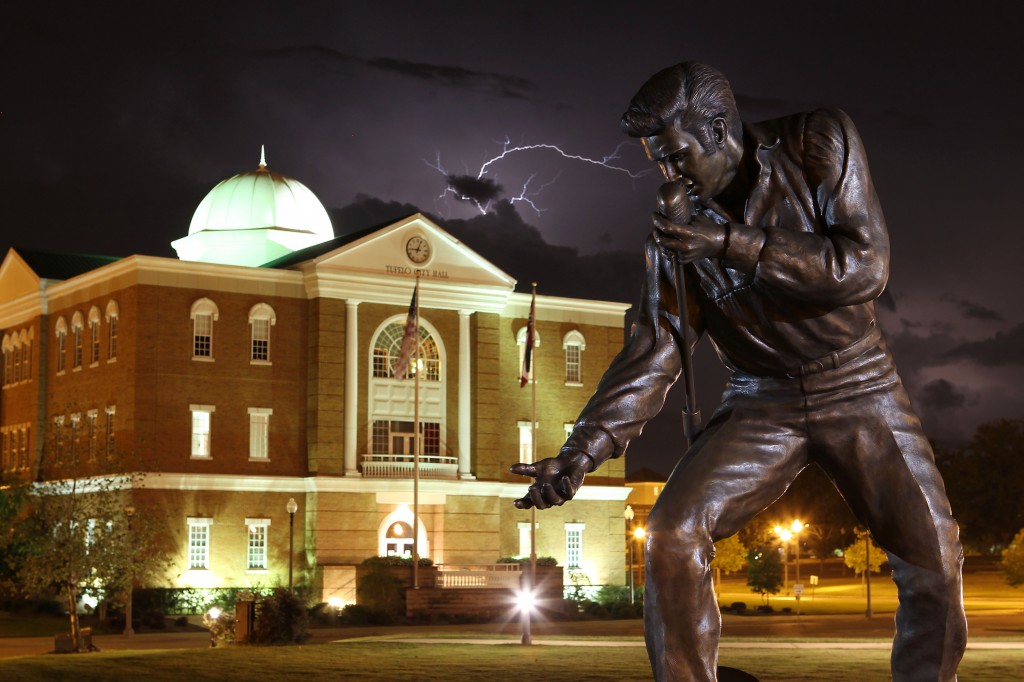 When asked about his track record of transforming iconic images into life-like multidimensional figures, Beckwith shyly smiles and shrugs.

“Any abilities in this field that I have is to take a limited amount of information and create a 3D object,” Beckwith said.

The city of Tupelo gave Beckwith a reproduction of the blue velvet shirt that Elvis wore for the concert, and Beckwith had his models wear it.

Beckwith began his career by obtaining an undergraduate and master’s degree in fine arts at the University of Mississippi in the mid-’70s. He worked as the foundry foreman for Charles Grose in sculpture. He helped run kilns until Grose retired. Beckwith has been teaching part time in sculpture or 3D design ever since. He teaches part-time so he can also focus on his art.

For several months he worked 12- to 14-hour days alongside the image of Elvis. After finishing in August 2012, he worked on a sculpture of Delta State University coach Margaret Wade. Coach Wade retired following the 1978-79 season with a career record of 465-85.

The entire world glimpsed how Beckwith works thanks to Memphis filmmaker Mike McCarthy, who followed Beckwith as he worked on the Elvis piece for a documentary.

It was McCarthy who pitched the idea originally to create an Elvis sculpture because of his own family ties to the scene. He said both his birth parents and his adopted mother were in the crowd at this Elvis concert photographed by Marshutz.“I pitched the idea of the Marshutz pose,” McCarthy said. “To my surprise and to the credit of their media specialist, Sean Johnson at the Tupelo Convention and Visitors Bureau, the city of Tupelo accepted the idea and ran with it. It was Sean’s idea to place the statue where it was installed, and also his decision to pick Bill Beckwith.”

Johnson said the project came about when he and McCarthy got the idea for the sculpture as they were scouting locations for the film, Tupelove.

The sculpture was unveiled August 9, 2012 during the week when Elvis fans from around the world were in Memphis and Tupelo to mourn the King.

“The Fairpark District in Tupelo is on the site of the old fairgrounds where Elvis played his Homecoming Shows in 1956 and 1957,” Johnson said. “We wanted to bring that image and time into the film and so were trying to find where the stage was for the concerts.”

CVB Director Neal McCoy embraced the idea of commissioning an Elvis statue and they offered the project to Beckwith. The sculpture cost about $75,000 and some of the funds were raised by a brick sale.

“The magical part of it is that fans will be able to come to Tupelo and reach up and touch the outstretched hand of Elvis just like the fans did in 1956,” Johnson said.

Written by Melanie Addington, Courtesy of the Oxford Eagle