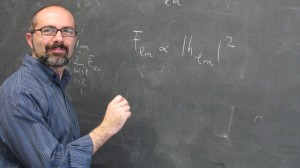 A global team of scientists, including a University of Mississippi physicist, has uncovered a curious case of cannibalism among super-massive black holes in space.

The research findings appear in the July issue of Physical Review Letters, one of the most prestigious peer-reviewed academic journals in the field. “Universality, Maximum Radiation and Absorption in High-Energy Collisions of Black Holes with Spin” is co-authored by Emanuele Berti, UM assistant professor of physics and astronomy, along with fellow researchers Ulrich Sperhake, Vitor Cardoso and Frans Pretorius.

PRL is among several publications produced by the American Physical Society and American Institute of Physics describing selected physics research papers to a broad audience of physicists, journalists, students and the public. This paper details how the scientists, who work in the United Kingdom, Portugal and the U.S., explored the impact of black hole spins on the dynamics of high-energy black hole collisions.

“Therefore, two small black holes colliding at large energies may result in two slow-moving, fat black holes.”
By monitoring apparent horizons before and after scattering events, researchers found that the “missing energy” is absorbed by the individual black holes in the encounter.

“Moreover, the individual black hole spins change significantly,” said Sperhake, the paper’s lead author. “An exploration of our results suggests that about half of the center-of-mass energy of the system can be emitted in gravitational radiation, while the rest must be converted into rest-mass and spin energy.

“Our work was mostly numerical, but we supported this conclusion with perturbative calculations.”
The results of this study can be used to investigate the modifications to the Standard Model of particle physics, and this may have implications in searches for extra dimensions of space-time using the Large Hadron Collider at CERN in Geneva. CERN is the site where the breakthrough discovery of the Higgs boson was reported last year.

Sperhake is a lecturer at the Department of Applied Mathematics and Theoretical Physics of the University of Cambridge, an adjunct professor of physics at UM and a visiting associate professor at the California Institute of Technology.

He included the work in an invited plenary talk at the 20th International Conference on General Relativity (GR 20 Meeting) in Warsaw, Poland. The talk covered various applications of numerical relativity and had five slides on the team’s work. The GR series, held every three years, is among the largest conferences on general relativity with more than 1,000 participants.

Pretorius is a professor of physics of Princeton University, distinguished research chair at Perimeter Institute and a former Alfred P. Sloan Research Fellow (2007-2011). He was recently awarded a prestigious Simons Investigator Award.

Berti and Sperhake began collaborating when they were both post-doctoral researchers at the University of Thessaloniki (Greece) in 2001-2002. Cardoso and Berti were postdocs at Washington University in St. Louis in 2005. Berti and Pretorius co-wrote their first paper in 2008.

To view the team’s PRL paper before publication.