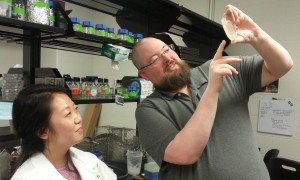 UM biologist Patrick Curtis examines bacterial specimens with one of his students.

They say good news comes in threes, and for the third time in 12 months, a University of Mississippi professor has received a Faculty Early Career Development Award from the National Science Foundation.

Curtis’ research on “Investigation of Conserved Global Regulatory Systems Using Cross-organism Comparison” will be funded for $ 767,103. His award begins in March and runs through February 2021.

“A model bacterium, called Caulobacter crescentus, has been studied for over 50 years,” Curtis said. “For a bacterium, it has a complex life cycle that is governed by these complicated intracellular signaling systems.

“What my research has shown is that a related organism, Brevundimonas subvibrioides, has the same life cycle, lives in the same environments and has the same signaling components. But some of them appear to work in a different way. This grant is to explore why these parts are working differently when there really isn’t any reason that they should.”

Using the developmental bacterium, Curtis and his team are studying dimorphic life cycles where, after division, the two resulting daughter cells have differing description and cell-cycle life styles.

“We are studying epigenetics in bacteria, which has hardly been touched, so we are hoping to be one of the pioneers in the field,” Curtis said. “People may not like to think about bacteria, but they are, by far, the most abundant life form on Earth and impact our lives in innumerable ways.

“We are also studying a basic biological question that even most biologists take for granted: how does one cell become two different types of cells. We know this happens – we observe it all around us – but the mechanics of it are barely understood. We’re trying to get at that.”

Curtis’s award also will support training in bacteriology at UM.

“A major part of the funding will support my two graduate students, Satish Adhikari from Nepal and Lauryn Sperling, who was an undergraduate here working in my laboratory and decided to stay on,” he said. “Another huge portion goes to laboratory supplies. Molecular biology is supply-intensive, so we go through a lot.

Curtis’s UM colleagues are excited about his achievement.

“This grant represents a significant investment in a young faculty member, and we couldn’t be happier for him,” said Paul Lago, UM chair and professor of biology. “His career at Ole Miss has developed nicely, and I believe he will continue to have a significant impact in the department and on biology students at the university for many years to come.”

“This award places Dr. Curtis among the top young scientists in the United States,” Kiss said. “He is clearly a leader in the field of microbiology, and I am very proud to have him as a colleague.”

Curtis said he is appreciative of the research support NSF has provided throughout his career.

“Two years ago, I was a reviewer for an NSF grant panel and it was a very disheartening experience simply because I saw so many really great grants that I knew would not get funded, not because they weren’t worthy, but because science funding in this country is at the lowest it’s been since before World War II,” Curtis said.

“I wondered how my grant could ever compete with grants from people that lead their fields and have 25-plus years’ experience. For some time after getting the news, I wondered if I had hallucinated the whole thing. I actually still wonder if it’s real or I’m still dreaming.”

Liljegren, Delcamp, Hammer and Dass all have had previous funding under Mississippi’s NSF EPSCoR Research Infrastructure Improvement (RII) Track-1 Grant. These attest to the effectiveness of that grant in helping to develop research competiveness within the State of Mississippi.

“CAREER awards are the most prestigious NSF awards for early-career faculty who integrate research and education in a very substantial way,” said Alice Clark, UM vice chancellor for research and sponsored programs. “They do not just fund a specific project, but are investments in the nation’s most outstanding faculty members in science and engineering.

“The fact that UM faculty have received three CAREER awards in a calendar year is a bold testament to the quality of our teacher-scholars.”

These awards are external validation of the growing research excellence of the science departments within the university’s College of Liberal Arts, said Lee Cohen, dean of the college.

“These awards also exemplify the kind of success that can be achieved when you have a helpful and encouraging faculty who are willing to assist their colleagues via mentoring,” Cohen said. “It is my understanding that UM’s previous NSF Award winners have been generous with their time and have been supportive in sharing the knowledge that they have regarding this highly competitive process, which I think is wonderful.”

Courses he teaches at UM include General Microbiology, Bacterial Physiology and Prokaryotic Development. Curtis has written more than a dozen peer-reviewed journal articles.

Goals of the NSF CAREER program include providing stable support for five years to allow the career development of outstanding new teacher-scholars in the context of the mission of their organization and building a foundation for a lifetime of integrated contributions to research and education. Success rates vary across NSF divisions/directorates and competition years, but the rate in biology generally is between 10 percent and 15 percent.

For more information about the UM Department of Biology, visit https://biology.olemiss.edu/ or call 662-915-7203.