New device could help commercial fishermen to avoid by catch 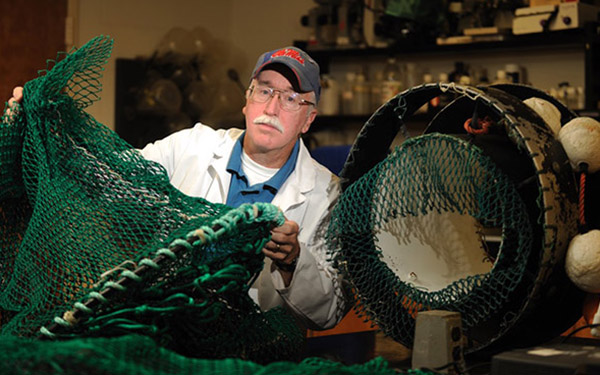 Fishermen unintentionally catch millions of sharks each year, and many don’t survive the physical stress of being reeled in, but University of Mississippi biology professor Glenn Parsons is designing a device that could prevent them from ever being hooked.

Accidental catches, referred to as “bycatch”, are a nuisance for commercial and recreational fishermen who are usually after tuna, swordfish and other seafood instead. The problem threatens to upset the ocean’s ecosystem, in which sharks play a major role but are dying in large numbers.

Parsons recently began testing a prototype and expects to make several trips into the Gulf of Mexico to fine-tune it. If his “entangling leader” device is successful, fisherman may not have to handle sharks, which have roamed the ocean mostly unchanged for some 400 million years.

“Commercial fisherman don’t want to catch these sharks,” Parsons said. “It’s dangerous to handle them. It takes time away from fishing and they also damage their gear. They’d rather not hook them at all.”

Some experts estimate that as many as 100 million sharks are killed each year. Many of them are larger, open ocean-dwelling sharks such as hammerheads, makos, tigers, great whites and others.

The deaths prompted the National Oceanic and Atmospheric Administration, which is working on a National Bycatch Strategy for sharks and other species, and the National Marine Fisheries Service to award research funds to find solutions. Parsons has received a $120,000 federal grant to develop his device and has an online crowdfunding campaign for his graduate students’ research.

The problem with bycatch isn’t that fish are simply hooked; rather it’s that the physical stress of fighting the reel, or being on the line for as long as six hours and then being hauled into the boat, that can kill them. Even if they’re released after many hours on the line, the outcome usually still isn’t good.

“Mostly everyone agrees that a huge percentage of those sharks die,” Parsons said.

Parsons’ entangling leader has several of loops of line near the hook. The design is based on the idea that the way sharks eat their food is much different than tuna or swordfish.

Sharks have larger, sharper teeth that they use for slicing prey into manageable pieces before swallowing them. Tuna, which have small teeth, and swordfish, which only have a rough a gripping surface along the edges of their mouths, both hold their food only long enough to swallow it whole.

The theory is that the loop design allows tuna and swordfish to take the bait and be hooked, but sharks would be prevented from doing the same.

“When a typical fish, one without sharp, cutting teeth, takes it, those loops will just spool out and hopefully the fish will be captured,” Parsons said. “When a shark takes it, the teeth entangle in the loops and that either breaks it immediately or it compromises the integrity of the line, so when they pull on it—and a big shark can pull like the dickens—it pops and they swim away.”

Recently, Parsons and his graduate assistants left from Destin, Florida, and ventured into the Gulf of Mexico to test the leader. Using a GoPro camera submerged near the hook, the Ole Miss team observed that for every shark that took the bait, about 10 looked at it and swam away. The ones that actually took the bait also broke the leader, Parsons said.

“The initial tests were really good,” Parsons said. “We have caught the larger sport fish, but the sharks break off.”

Further testing could determine if the bait is still attractive to other fish with the loop device in place. Parsons’ team will make trips from the Alabama, Louisiana and Mississippi coasts into the Gulf later to continue the research.

The team caught four different shark species on the recent trip to Destin, said Lauren Fuller, a biology graduate student from Cabot, Arkansas, who is helping with the research.

“We had many entangling leaders break as they were supposed to,” Fuller said. “After looking at the GoPro video, we’re pretty certain these were sharks and we know one was for sure. The research looks promising but, of course, we’ll have to wait until we analyze all of the data to know more.”

Fuller’s graduate research focuses on finding ways to reduce the stress on caught sharks. She is examining whether using clove oil to sedate them could help.

“It is my hope that this will lead to higher chances of survival after release,” Fuller said.

Ehlana Stell, a biology graduate student from Booneville, studies fish biology and has been working with silver carp, but is also helping with the shark project. She has hope Parsons’ device can greatly reduce shark deaths.

“The preliminary data for the entangling leader is looking very promising and hopefully this summer’s work will continue to allow Dr. Parsons to improve his design,” Stell said.

This project received funding under award NA15NMF4720378 from NOAA Fisheries Service, in cooperation with the Bycatch Reduction Engineering Program. The statements, findings, conclusions and recommendations are those of the investigators and do not necessarily reflect the views of NOAA Fisheries.