UPDATE FROM DR. KISS: Our experiment (Seedling Growth-2) was launched on SpaceX4 into orbit on a resupply mission to the International Space Station (ISS). Following a weather-related scrub on Saturday morning, liftoff from launch complex 40 at Cape Canaveral occurred at 1:52am Eastern early on Sept. 21, 2014. The experiment will start on Oct. 17, 2014.

University of Mississippi research into the potential of farming in space continued early Saturday, Sept. 20, with the launch of more seedlings headed to the International Space Station.

The seedlings are part of the research of John Z. Kiss, dean of the University of Mississippi Graduate School and professor of biology, who also is the recipient of NASA’s 2014 Outstanding Public Leadership Medal. 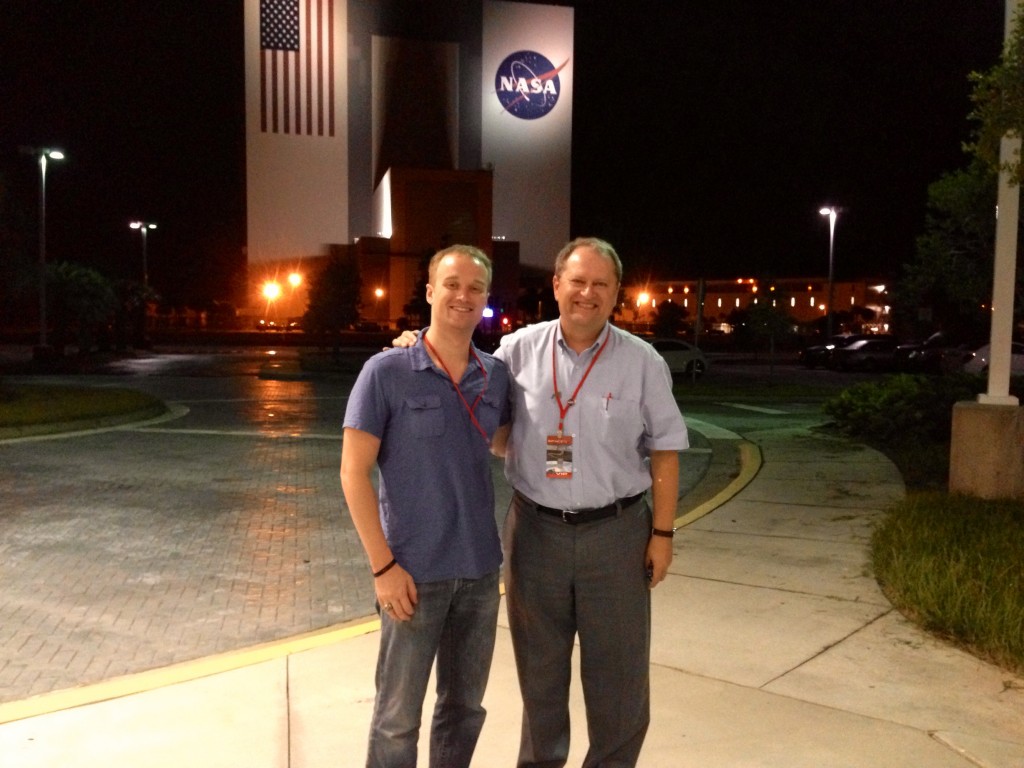 John Kiss, professor of biology, and Josh Vandenbrink (post-doc on project) waiting for the launch.

The renowned scientist has worked with NASA for nearly three decades, having served as vice chair of the International Committee on Space Research.

As TROPI (an experiment to investigate the growth and development of plant seedlings under various gravity and lighting combinations) spaceflight project director from 2004 to 2010, Kiss supervised 36 scientists and engineers at four NASA centers and two centers of the European Space Agency. These efforts resulted in two successful projects on the International Space Station.

The launch will include Seedling Growth-2, a continuation of this research. According to a release from NASA, “Seedling Growth-2 will germinate and grow seeds of the Arabidopsis thaliana plant, a member of the mustard family, into tiny seedlings in space. Investigators will study these seedlings to gain a better understanding of the cellular signaling mechanisms involved in plant tropisms—plant movement and growth. The major goals of this project are to determine the combined influences of light and gravity on plant development through the identification of changes in the mechanisms and regulation of essential cellular functions.”

This is the SpaceX Dragon spacecraft’s fourth commercial resupply mission to the space station. It is scheduled to lift off on a Falcon 9 rocket from Cape Canaveral Air Force Station in Florida at 1:14 a.m. Saturday. If the launch is postponed, the next launch opportunity is approximately 12:53 a.m. Sunday (Sept. 21).

NASA will host a post-launch briefing about 90 minutes after launch. If launch occurs Saturday, NASA TV will provide live coverage Monday (Sept. 22) of the arrival of the Dragon cargo ship to the International Space Station. Grapple and berthing coverage will begin at 4:30 a.m. with grapple at approximately 6:30 a.m. Berthing coverage begins at 8:30 a.m.

For information about the missions and the Space Biosciences Division at Ames, visit http://www.nasa.gov/ames/research/space-biosciences

For information about the International Space Station, research in low-Earth orbit, NASA’s commercial space programs and the future of American spaceflight, visit http://www.nasa.gov/exploration