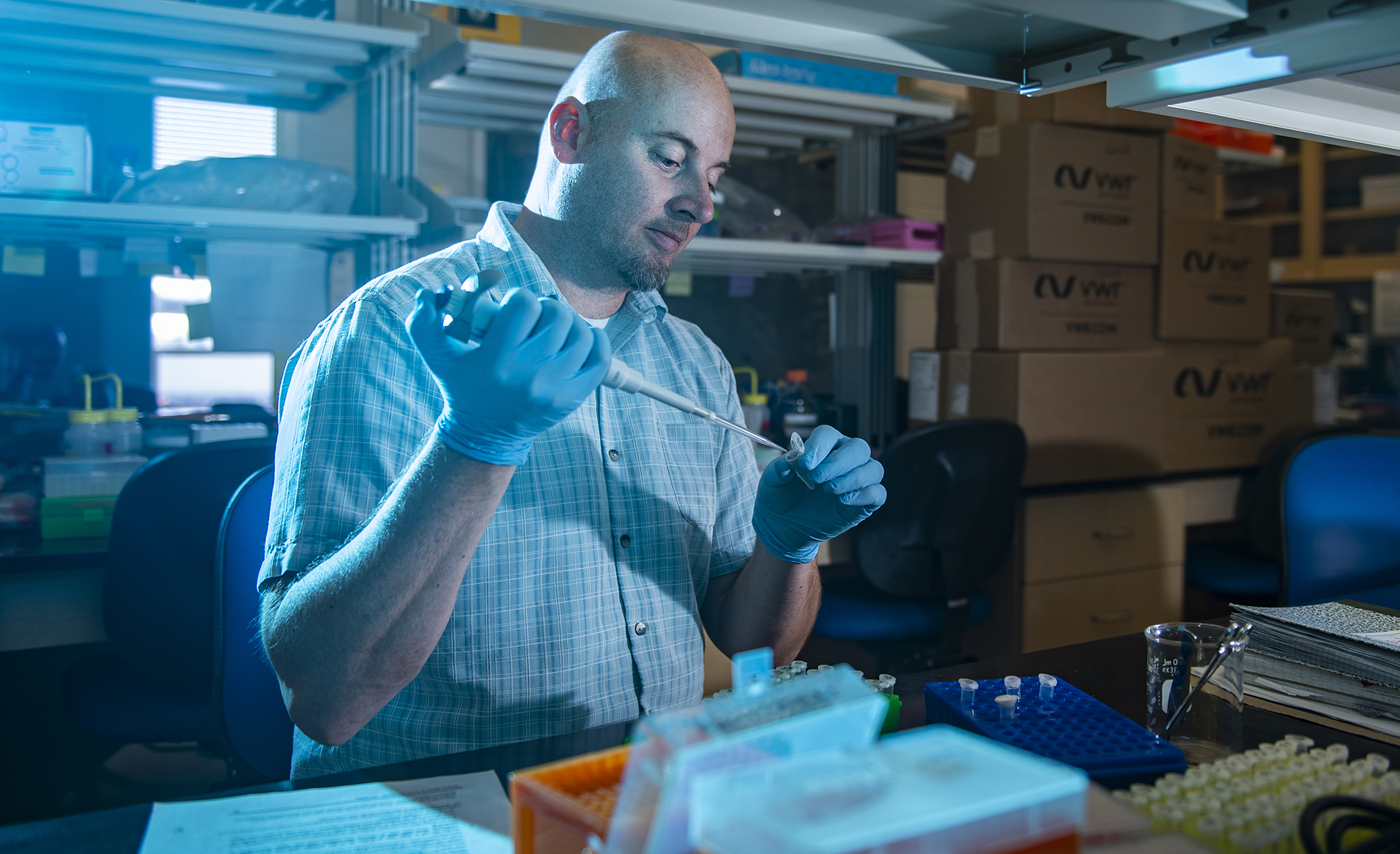 Ryan Garrick, UM associate professor of biology, works with samples in his lab. His study of DNA samples from Galapagos giant tortoises is revealing new insights into the evolutionary history of the species. Photo by Logan Kirkland/ Ole Miss Digital Imaging Services

A University of Mississippi professor’s comparisons between two lineages of Galapagos tortoises is yielding new insights into the evolution of the ancient species, as well as opening new doors for biologists to study evolution.

Ryan C. Garrick, associate professor of biology, co-authored a paper on “A new lineage of Galapagos giant tortoises identified from museum samples,” which appears in the February issue of the peer-reviewed journal Heredity.

“This work made use of ancient DNA techniques, whereby the bones of tortoises that had died over 100 years ago were used to characterize the genetic makeup of the population that previously existed on one of the islands, San Cristobal,” Garrick said. “This was coupled with sampling and DNA sequencing of the tortoise population that lives on that same island today.”

When the historical and contemporary gene pools were compared, researchers discovered that they were extremely different from each other. Nearly all the historical samples belonged to a tortoise lineage that is distinct from all others that exist across the many islands of the archipelago.

Moreover, there is evidence that the two lineages coexisted. This is because one of the historical samples – collected alive in 1906, during an expedition led by the California Academy of Sciences – was genetically similar to the tortoise population that inhabits San Cristobal Island today.

“This work shows that evolutionary history of an iconic group like the Galapagos giant tortoises is complex, such that some surprises that still remain to be discovered despite all the years of intensive study,” Garrick said. “Simple explanations often do not hold up.”

For example, when the historical lineage became extinct, the island should later have been colonized by what we call the contemporary lineage, he said. Instead, the two lineages coexisted and likely competed with each other for limited resources.

“Clearly, there was only one winner,” Garrick said. 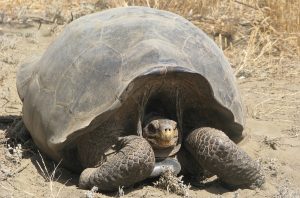 Giant tortoises from the Galapagos Islands of Ecuador are being studied to understand the evolution of biodiversity within island archipelagos, and to advance conservation. Photo courtesy Yale University

“The DNA from bones of long-dead tortoises served as a critical window into the past, thereby enabling a comparison with the present,” he said. “Natural history collections, such as those that preserve animal and/or plant tissues for future use by researchers, are often undervalued.

“Here we have shown that without these scientific expeditions that seek to collect and document biodiversity today, research in the future would suffer.”

Understanding the evolutionary history of giant tortoises on San Cristobal Island may hold further clues to reconstructing the history of tortoises across the Galapagos Archipelago. Also, the recognition of an additional lineage of giant tortoise on San Cristobal Island may have implications for taxonomy, the field of biological research concerned with the description and naming of species.

“We are pursuing both of these lines of research by collecting and analyzing additional data,” Garrick said.

“Dr. Garrick’s work on one of the most fascinating species of the Galapagos, a region inextricably linked to biological evolution in the minds of not only scientists but the broader public, continues to reveal surprising facets of a complex evolutionary history.” Noonan said. “This research group has greatly enhanced our understanding of the Galapagos biota, and I’m keen to see the next revelations from this group.”

The biologist collaborated as part of an international research team on the discovery of a new species of the Galapagos giant tortoise, findings that were included in the Oct. 2, 2015 issue of PLoS ONE, a peer-reviewed journal published by the Public Library of Science. Working as part of a group led by Yale University, Garrick used genetic data to help uncover the existence of the new species on Santa Cruz Island in the Galapagos.

Garrick also was an author on related papers published earlier in the journals Scientific Reports, Ecology and Evolution, and Molecular Ecology.

An Ole Miss faculty member since 2012, Garrick received his bachelor’s and doctoral degrees from La Trobe University in Australia. He previously was a postdoctoral researcher at Virginia Commonwealth University and at Yale University.