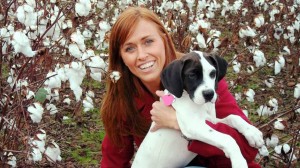 Janet McCarty and her dog, Cotton

When it comes to the University of Mississippi’s Gillespie Business Plan Competition, it seems things have gone to the dogs. Well, at least to the treats made especially for those canine companions.

During the 2014 competition, Madison native Janet McCarty, founder of Cotton’s Café Dog Treat Barkery, walked away with top honors, including Best Business Plan (First Place), Best Concept for Mississippi and Best Concept for Social Entrepreneurship. In addition to barking rights, McCarty earned $10,000 in prize money, funds she was able to invest right back into her business.

“After winning the Gillespie Business Plan Competition, we have grown exponentially,” McCarty said. “With the proceeds from the competition, we have procured a commercial kitchen space, acquired an automatic dough roller and a convection oven, purchased a significant inventory of raw ingredients and have increased cash flow, allowing us to move forward with confidence as a growing business.”

The business is named after Cotton, a rescue dog who inspired McCarty’s vision. While making natural, healthy treats for pets is second nature to McCarty, winning the business plan competition was no cakewalk for this senior from Madison, who is majoring in art.

“For me, the learning curve was steep. It was like learning another language in a couple of months,” McCarty said. “(The competition) forced me to look at parts of the business that I wasn’t focusing on. For example, I had to look at how to prepare a balance sheet, a cash flow statement and a profit-and-loss statement. I had to learn about gross margins, break-even points and how to create a business model.”

Thirty-one plans were entered into this year’s competition. The team composed of junior engineering majors William Ault, from Charlotte, North Carolina, and brothers Michael and Stephen Greer, from Clinton, won second place for their “Social Data Services” plan. Graduate students Nathan McCartney of Oxford, Miles Nerren of Tupelo and Blake Pruett of Belden teamed up with senior business major Adam Vonder Haar of Brandon to present “U-Scoot” and walked away with awards for third place and best interdisciplinary team honors.

The competition included three rounds and provided the finalists with access to mentors from the real world. That resource helped McCarty create and deliver and a polished presentation and strengthened the overall credibility of the competition.

“The business plan competition helps the participants refine their business models and gain access to a broader network of resources, whether in the forms of advice or capital,” explained Clay Dibrell, UM associate professor of management. “For instance, Janet was already selling premium dog biscuits before she entered the competition. The competition forced her to think more about the business side of the equation. As she proceeded through the different rounds of the competition, you could see marked improvement not only in her pitches but also in her business acumen.

“When she won, Janet was then able to plow her winnings back into her business and increase her manufacturing capacity, which has led to an increase in her sales.”

In its 10th year, the Gillespie Business Plan Competition is a hallmark of the esteemed business program offered at UM. This year, participants took advantage of Startup Weekend Oxford, as well as a “pitch night” hosted by the Oxford-Lafayette Chamber of Commerce. These events generated excitement and allowed several of the semi-finalists an opportunity to practice their pitches in front of live audiences.

“The Gillespie Business Plan Competition is a wonderful experiential learning environment for our students,” said Ken Cyree, dean of the UM School of Business Administration. “The generous gift from the Gillespie family and other donors, along with the time commitment from our judges and the efforts of School of Business faculty, make the competition successful. We in the business school are proud to have such an impactful event for our future entrepreneurs.”

“The business plan competition helped me to create a rock solid business plan and presentation that I can use when approaching investors, banks, retail store chains and others,” McCarty added. “The plan is my guide and my reference for tracking my progress and reaching the goals I laid out in it.”