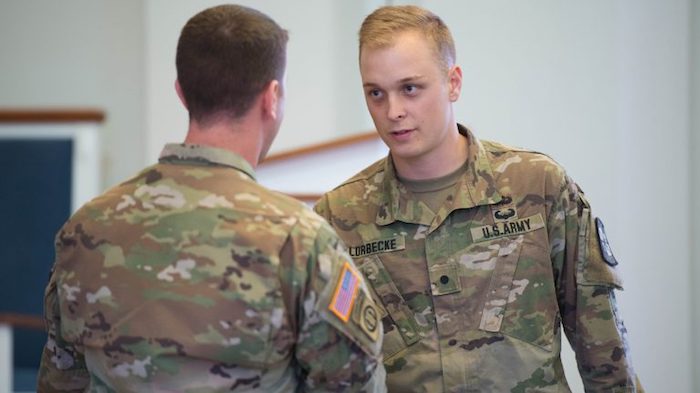 Most military personnel are honored after having engaged in active combat, but one University of Mississippi Army ROTC cadet is being nationally recognized before even being commissioned.

CDT Donald Lorbecke, a fifth-year senior majoring in mechanical engineering with a minor in military science from Madison, Alabama, has been selected to receive the Society of American Military Engineers ROTC Award of Merit.

“It is a fairly select award that is competitive among all service branches commissioning programs,” said Lt. Commander Joshua Taylor, chair of the university’s Army ROTC and professor of military science. “With over 5,000 cadets per cohort nationwide in Army ROTC alone, it is quite an honor for him.”

Lorbecke, who receives his bachelor’s degree in mechanical engineering Saturday at Commencement, will be commissioned in the Mississippi Army National Guard as a 2nd Lieutenant Engineer Officer. He said he is humbled by his recognition.

“I was very honored to learn the selection process for this award,” he said. “Sometimes, I forget that I am doing more than people expect. I think it is because I am doing what I love: military and engineering.”

Taylor said Lorbecke is “unmatched by his peers in terms of his character, competence and commitment to duty.”

“I have watched Cadet Lorbecke grow as a leader and embrace a sense of stewardship for the profession,” he said. “He is completely selfless in all actions and commits more time toward giving back to our program.

“He is a genuine leader and will excel in all that he does. It was a privilege to have him in our program.”

Lorbecke and his sister, Margo Lorbecke, were raised by their aunt and uncle, Jean and Jeff Downs of Madison. The Downs, both Ole Miss alumni, influenced Lorbecke’s decision to attend the university.

Lorbecke said he is grateful for professors in both the mechanical engineering department and Army ROTC program. 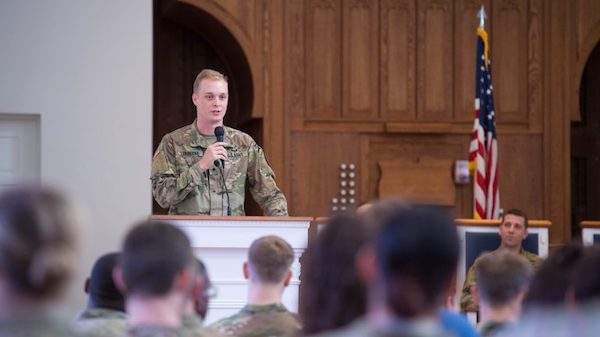 As for his ROTC instructors, Lorbecke lists Capt. Joseph Gooch, operations officer and MS III instructor, and Maj. Ronald Rogers, MSARNG recruiting BN, Program XO and MS I instructor, as having been his most influential.

“They showed you how a great leader should act and take care of soldiers,” he said. “Capt. Gooch prepared us for our advanced camp summer evaluations last year. Without him, I would not have received the Distinguished Military Graduate Award.

“Maj. Rogers was the assistant professor of military science and the National Guard Simultaneous Membership Program instructor. His presence would give you this feeling that he truly did care for the development in others and the program.”

Rajendran commended Lorbecke upon his recognition.

“I’ve always admired Don’s attitude and demeanor towards all activities during throughout his undergraduate education here at the Ole Miss,” he said.

Rajendran interacted with Lorbecke during the 2018 American Society of Mechanical Engineers robot design competition. Lorbecke was a member on one of the two teams that participated in the competitions at Pennsylvania State University at State College, Pennsylvania.

“Don and his team designed the robot with enormous passion and hard work,” Rajendran said. “He has been a rising star as an ROTC cadet. Winning the SAME award further confirms Dons’ well-rounded accomplishments.”

“Donald is a remarkable young man with excellent leadership, strong determination and true integrity,” Cheng said. “He is well-deserving of this award and I believe he will soon distinguish himself in his very promising military and engineering career. We are proud to claim him as an Ole Miss engineering alum.”

The SAME Award of Merit, a bronze medal with bronze key replica, was authorized in 1948 to be awarded annually to outstanding junior and senior engineering students in the ROTC program. A central military service board selects outstanding students for the awards from nominations submitted by the professors of military science and technology, naval science and aerospace studies.