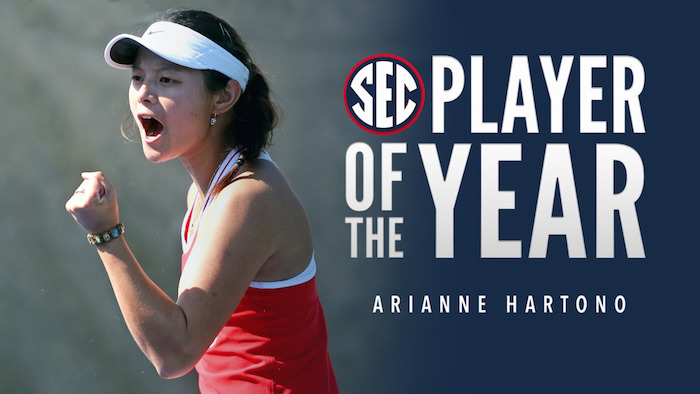 BIRMINGHAM, Ala. – Ole Miss senior Arianne Hartono made history Wednesday, becoming the first Rebel women’s tennis player to be named SEC Player of the Year, as the Southeastern Conference announced the 2018 yearly awards and All-SEC teams.

The Rebels tied for the second most honorees (5) this year with Vanderbilt, one behind Georgia (6).

“What a tremendous honor for all these ladies to be on the All-SEC team,” head coach Mark Beyers said. “They are absolutely deserving of this honor. They have all been instrumental in the success of our team this year. I can’t say enough about these ladies, their work ethic and them challenging themselves to get better each and every day!”

Hartono, a psychology major and native of Meppel, Netherlands, is the highest ranked SEC singles player at fifth in the Oracle/ITA rankings. She is also the highest ranked doubles team in the SEC, ranked seventh with Bortles. Hartono goes into NCAA action, 20-2 in dual singles matches and ended the SEC season 11-2 in singles play. She has 13 nationally ranked wins and has won nine in a row.

“As far as Ari is concerned, going 20-2 in a dual match season is an incredible accomplishment at any position,” Beyers said. “For her to do that at the No. 1 position is absolutely insane. This conference is by far the toughest conference in the nation, with five teams currently ranked in the top 10. To be named SEC Player of the Year, is something very special!”

All five players have helped lead Ole Miss to its current ranking of No. 5 in the nation and the first 20-win season since 1999. The Rebels earned their highest finish (5) in the SEC since 2012 and reached the SEC Tournament Semifinals for the 11th time in program history.

Vanderbilt head coach Geoff Macdonald was tabbed SEC Coach of the Year for the fifth time. Georgia’s Katarina Jokic was named SEC Freshman of the Year and Florida’s Josie Kuhlman was named Scholar-Athlete of the Year during the SEC Tournament.

The Rebels are in line to host the First and Second Rounds of the NCAA Championships. The 64-team bracket and host sites will be revealed May 1 at 4 p.m. CT.