Jennifer Ford (left), head of the Department of Archives and Special Collections, and Cecilia Botero, UM dean of libraries, share an autographed poster from ‘The Phantom of the Opera’ with Chancellor Jeffrey Vitter and his wife, Sharon. The poster is a gift from the Actors Fund of America. Photo by Robert Jordan/UM Communications

Curators of the Mamie and Ellis Nassour Arts and Entertainment Collection at the University of Mississippihave created a unique archive to honor the late actress Marian Seldes and the Actors Fund of America, the latter for its generous donations of theatrical memorabilia.

To mark its establishment, the Actors Fund donated a framed poster signed by the original cast of Broadway’s longest-running musical, “The Phantom of the Opera.” Representatives of the fund also gave a commemorative Actors Fund 125th anniversary ornament to Chancellor Jeffrey Vitter and his wife, Sharon, for use at Carrier House, the UM chancellor’s residence.

“At the University of Mississippi, our arts and cultural programs are among the best, and one of our most passionate supporters is alumnus Ellis Nassour,” Vitter said. “We are extremely grateful to Ellis and to the Actors Fund for their gifts to Ole Miss.

“These donations enhance our Department of Archives and Special Collections and are a great resource for our students, faculty and staff.”

In celebration of the gift, the Department of Theatre Arts staged a reading with UM students John Brahan, a senior acting major from Hattiesburg and Ole Miss Hall of Fame inductee, and Rachel Staton, a senior musical theatre major from Atlanta who won and Outstanding performance award from the Kennedy Center’s American College Theatre Festival.

Brahan and Staton performed excerpts from Tennessee Williams and Edward Albee plays in which Seldes starred. The performance was directed by Rory Ledbetter, associate professor of theatre arts.

Co-founded in 1882 by classical actor Edwin Booth, the Actors Fund of America is a nonprofit human services organization that serves professionals in theater, film, television, music, opera and dance through programs that address their unique and essential needs. Joseph Benincasa is president and CEO of the fund, and Tony Award-winning actor Brian Stokes Mitchell is board chair.

“We were happy to support this archive and the memory of Ms. Seldes, who was an ardent supporter of the Actors Fund,” Benincasa said.

The Actors Fund gifts, which began in 2015, include framed and signed Broadway posters from noteworthy performances and annual Actors Fund all-star fundraising galas. 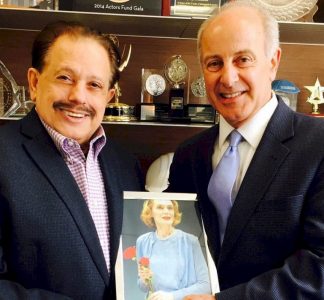 Ellis Nassour, a Vicksburg native and member of the Ole Miss Class of 1964, suggested that the archive be named for Seldes, his longtime friend.

“Marian was among the most admired and hardest-working actors on any stage,” Nassour said. “Her 60-year career covered theater, television, film and radio. Her conversational abilities are still legendary. She was indefatigable until the very end.”

Seldes was honored with Tony and Drama Desk awards, as well as numerous nominations. She was inducted into the American Theater Hall of Fame in 1995 and presented a Tony Award for Lifetime Achievement in 2010. She died in 2014.

The Mamie and Ellis Nassour Arts and Entertainment Collection, dedicated in 2004, was donated by Ellis Nassour in honor of his parents.

The collection includes posters, bound film and theater scripts, photos, caricatures, circus posters, show souvenir books and theatrical memorabilia. It also includes an impressive assortment of playbills, many of which are autographed, from performances worldwide.

A third of the collection is designated for exhibition display, and another third is archived for research. The most important third, Nassour said, is a growing collection of DVDs of film, opera and dance and CDs, ranging from country and pop to Broadway, classical and opera, that is available for circulation.

“We are extremely grateful to both Mr. Nassour and the Actor’s Fund of America,” said Jennifer Ford, the library’s head of special collections. “Donations such as these help to ensure the outstanding nature of the unique archival collections at the University of Mississippi.”

The collection is an amazing resource, said Ed Meek, an Ole Miss classmate of Nassour, former UM assistant vice chancellor and founder of the Meek School of Journalism and New Media.

“When he was director of social affairs for the Associated Student Body in the ’60s, the innovations he brought to revamping campus entertainment were impressive. He went on to establish a niche in New York among his news and public relations peers.

“This is another first for the university that could only be made possible by an alumnus who loves Ole Miss.”

Nassour points out that he had help from ASB presidents Douglas Abraham, Dick Wilson and Tom Cleveland, volunteers on various committees and the late Tom Hines, dean emeritus of students.

Early in his life, Nassour developed an interest in the performing arts. At UM, he was a contributor to The Daily Mississippian, where his first interview was Bob Hope, who was performing on campus.

Nassour began collecting materials related to the entertainment industry while at The New York Times, where, under the tutelage of Mississippian Turner Catledge – at the time the newspaper’s managing editor – he climbed the ranks.

Nassour has written two biographies of Patsy Cline: the first, “Patsy Cline, An Intimate Portrait,” in 1981 and “Honky Tonk Angel: The Intimate Story of Patsy Cline,” in 1993. The entire spoken portion of the revue “Always, Patsy Cline” is taken from four pages of Nassour’s biography.