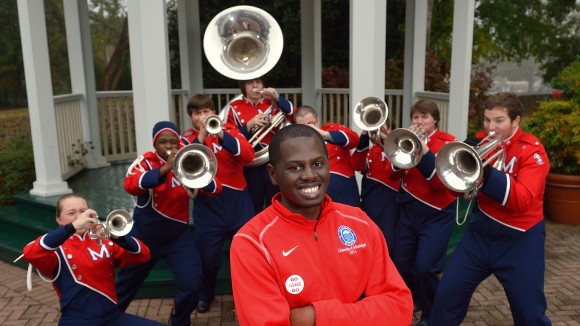 Chris Presley, a 2012 UM graduate and former drum major of the Pride of the South Marching Band, is named as an honoree for eight new band scholarships for polished brass players.

An anonymous gift of $100,000 has been presented to the University of Mississippi Pride of the South Marching Band in honor of Chris Presley, the band’s drum major in 2010-2012. A Batesville native, Presley graduated in 2012.

Besides his leadership and service through music, Presley was an Ole Miss Women’s Council Scholar, a 2011-2012 Campus Favorite, recipient of the Marcus Guinn Spirit Award, on Chancellor’s Honor Roll and participated in groups including Gamma Beta Phi, the Academic Affairs Committee of the Associated Student Body, Omicron Delta Kappa, Mortar Board and Increasing Minority Access to Graduate Education.

“I am grateful for being a member of the Pride of the South Marching Band, as it gave me the opportunity to develop as a true leader on campus,” said Presley, who is completing his master’s in higher education and student affairs administration at the University of South Carolina.

“At Ole Miss, I was part of a family of 300 who shared our love for playing music. I was also blessed to establish lifelong relationships with both the staff and band members from different backgrounds. As drum major for the Pride of the South, I was able to achieve my goal of bringing more positive recognition and respect to our band from students, faculty, administrators and alumni.”

This new Polished Brass Band Scholarship Fund creates eight $3,000 scholarships to be awarded for four years beginning in the 2013-14 academic year. It has allowed David Willson, director of bands, to recruit incoming freshmen or community college transfer students from Mississippi who excel at the trumpet, trombone, baritone or tuba and who exhibit strong leadership qualities. 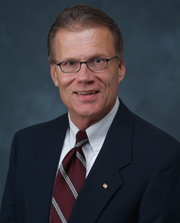 “We are thrilled about this generous gift to the Ole Miss Band,” Willson said. “The donor family has been supportive for many years, coming to fundraisers and concerts. They are big fans.

“We hope this interest will motivate others to help us endow scholarship funds to maintain a strong margin of excellence against our peer institutions.”

Also being honored by these scholarships are Betsy and Wade Creekmore and Jan and Lawrence Farrington of Jackson, Mary Sharp and Jim Rayner of Oxford and Amanda and Edward Wilson of Birmingham. These alumni are also longtime supporters of the Pride of the South Marching Band, enjoy friendships with Chris Presley and appreciate the work of Willson and William DeJournett, director of the marching band.

The 2013 edition of the band is the largest in its history. Founded in 1928, the initial marching band used instruments, uniforms and equipment donated by the National Guard. Not until 1934 did the Rebel Band own full dress uniforms, purchased by funds solicited by the general student body.

“The normal fan does not realize how much a band student has to give of themselves,” Willson said. “Ninety-five percent provide their own instrument, have spent years getting the skills they need to serve the university and work many hours in all kind of weather to show up and work on game day. Fans’ recognition of our students is the best feedback we get, and a good scholarship is key in recruiting and retaining band students for Ole Miss.”

Presley echoed Willson’s statement and agreed that this recognition has reciprocal benefit.

“Being honored by this large contribution to the band helps me realize the impact I made on the Ole Miss community at large,” he said. “It lets me know that someone was watching and noticed my passion for the Pride of the South. … I will forever be indebted to Ole Miss and the band for the amazing experience and will cherish the memories for a lifetime.

“Now as an Ole Miss alumnus, I have seen the positive impact alumni have made on our institution, and I have made it my goal to continue to recruit students, donate and raise money for the band as I did while at Ole Miss.”

Ron Wilson, director of development for the College of Liberal Arts, conveyed the need for such scholarships.

“As costs for college attendance rise, students are sometimes forced to choose between participating in enriching activities such as band or taking on additional employment,” he said. “Scholarship support makes it possible for students to fully realize their potential, earn degrees and participate in programs that augment the Ole Miss experience for us all.”

Besides  scholarships, the donation also creates the Band Faculty Support Fund, which will provide support for faculty development at the director’s discretion.

“This gift will enable Director Willson to provide his faculty needed support and attract the best student-musicians to our supremely talented Pride of the South Marching Band,” Chancellor Dan Jones said. “We have done an excellent job showing our band’s strength on the football field this year, but more importantly, sending the message of what it means to truly be an Ole Miss Rebel. This gift will make that message louder and clearer.”

The Polished Brass Band Scholarship Fund and the Band Faculty Support Fund are open to receive gifts from individuals and organizations. Anyone can contribute by sending a check with the fund noted to the University of Mississippi Foundation, P.O. Box 249, University, MS 38677; contacting Ron Wilson at 662-915-1755 or jrwilso3@olemiss.edu; or visiting http://www.umfoundation.com/makeagift.