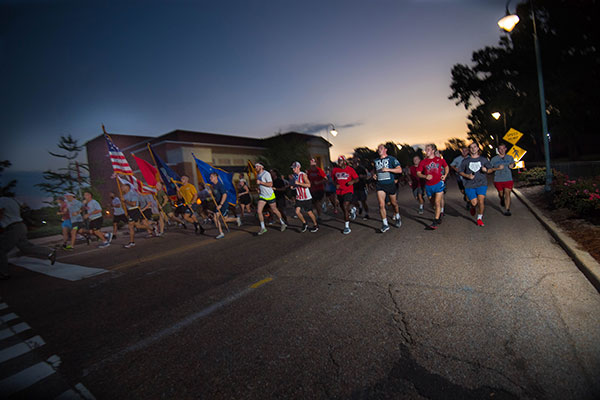 The University of Mississippi ROTC programs’ 9/11 Memorial Run is set for Monday, Sept. 11, 2017 at 5:30 a.m. The event is annually held in remembrance of the victims of the Sept. 11, 2001 terrorist attacks on the United States. Photo by Kevin Bain/UM Communications

The University of Mississippi’s ROTC programs host the annual 9/11 Memorial Run at 5:30 a.m. Monday in remembrance of the Sept. 11, 2001 terrorist attacks on the United States.

Nearly 3,000 people were killed in the attacks on New York and Washington. The run, which is in remembrance of the victims and the first responders who came to their aid, begins in front of the Lyceum steps and continues to the Oxford Square and back.

All local first responders and the public are invited to the run, which is open to anyone who wants to either participate or show their support by encouraging the runners.

“The Memorial Run is dedicated to remembering the lives that were lost during the 9/11 terror attacks and also the brave men and women who responded to the attack,” said Scott Caldwell, recruiting operations officer for UM’s Army ROTC. “The 9/11 Memorial Run helps remind members of the local community of the importance of coming together in times of crisis.”

The university’s Army, Navy, Marine Corps and Air Force ROTC programs host the event each year. Ole Miss is one of the nation’s few universities to have all four branches of military service represented on campus, Caldwell said.

The run is an important event that brings together all the ROTC military services and local first responders, he said.

This year’s event will feature commemorative T-shirts and a display of 3,000 flags in honor of the victims, among other improvements to the program, said Army ROTC cadet Donald Lorbecke, a senior mechanical engineering major from Madison, Alabama.

“The 9/11 run has been showing the bond between military, firefighters, police and the Ole Miss community,” Lorbecke said. “Every year, we have an impressive crowd that shows up and does the 2 miles to the Square.”

“It is an event mainly organized by cadets, and we take great care in ensuring the significance of this event is recognized,” Duff said. “This event is a time for us to honor the memories of the lives lost that day and pay tribute to the service of the men and women who responded so bravely.

“Also, it is a time for us to reflect on the importance of our future service to this great country and what it is that we are fighting to preserve.”