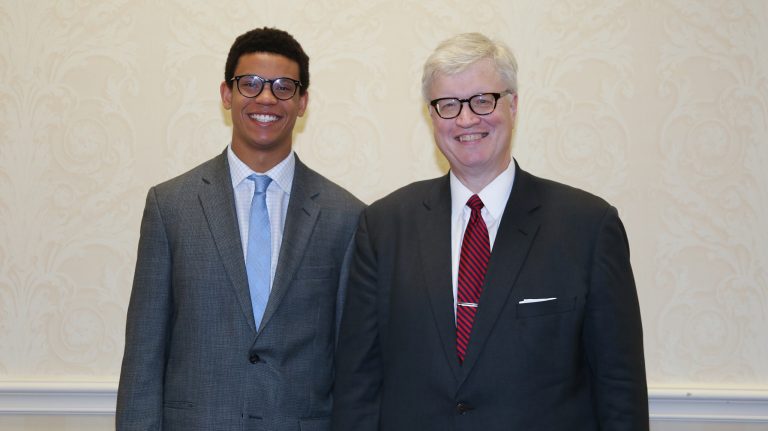 Austin Powell (left), a senior from Corinth majoring in public policy leadership and philosophy and the UM Associated Student Body president, and John Czarnetzky, UM professor of law, were among those honored at the 30th annual Higher Education Appreciation Day-Working for Academic Excellence program in Jackson. Submitted photo

University of Mississippi students and faculty were among the honorees at the 30th annual Higher Education Appreciation Day-Working for Academic Excellence, or HEADWAE, awards program Feb. 21 in Jackson.

Austin Powell, a senior from Corinth majoring in public policy leadership and philosophy, and Ben Carroll, a member of the UM School of Medicine class of 2017, were the university’s student honorees. John Czarnetzky, professor of law, and Dr. David Norris, associate professor of family medicine at the UM Medical Center, were the faculty representatives on the awards program.

“I am surprised and honored,” said Powell, the Associated Student Body president. “I think receiving this honor is a testament for everyone who has believed and supported me because I could not have done any of this by myself.”

Carroll, also a 2016 Gold Humanism Honor Society inductee from Jackson, said it is a great honor to be recognized for his commitment not only to the content of his own education, but also to the future of all students at the UM Medical Center.

“I was excited to meet with students and faculty from around Mississippi who share a similar passion for helping our state’s higher learning communities reach for greater and greater heights,” Carroll said.

Czarnetzky is a four-time professor of the year honoree and the 2016 recipient of the Elsie Hood Award, which is the highest award received for teaching at the university.

“To be invited to participate with similar awardees from higher education institutions throughout Mississippi is an honor and great privilege,” Czarnetzky said.

Norris, a Gold Key Honor Society member, said it is gratifying to have his efforts rewarded.

“For me, this award is a double honor because it comes from my fellow faculty and the administration, and it is always a pleasure to have your peers notice your hard work,” he said.

HEADWAE was established by legislative resolution to honor students and faculty from the state’s public and private institutions of higher learning who have made outstanding contributions in promoting academic excellence.

The UM and UMMC honorees were among 62 others from Mississippi’s 34 public and private universities and colleges.

The winners were welcomed by Gov. Phil Bryant at the state Capitol and given a tour of the historic building. They also attended an awards luncheon where Rod Paige, interim president of Jackson State University, gave a keynote address.